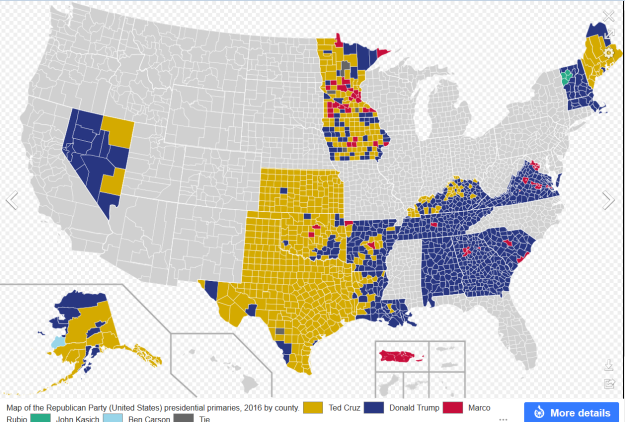 In last week’s column, I posited that it was super-possible that both nominations would effectively be decided on Super Tuesday. Now that the Tuesday in question has come and gone and we’ve also had a pretty swell Saturday’s (and pinch of Sunday) worth of contests, how am I doing? In all honesty, I’d have to give myself a 42.5%. As follows…

I think it’s important to fully out myself before I say what I’m about to say. No surprise to anybody who knows me, I lean toward the Progressive side of the fence. I would vastly prefer to see Sanders be the nominee instead of Clinton, and I think he’s the only major candidate in the race who is even close to talking about the magnitude of changes we’ll need to make to avoid disaster at home and as a global species in the coming decades. I voted for him in our primary in Vermont, contribute to his campaign every pay day, and will continue to do so as long as he’s in the race. Despite all this, I am, reluctantly, 85% confident that the Democratic Race has in fact been decided for Clinton, though it will take the numbers a while to catch up.

It comes down to some simple facts of math. Counting just the pledged delegates because, as many people have pointed out, Superdelegates can (and do) change their votes as the race shifts, we currently have: 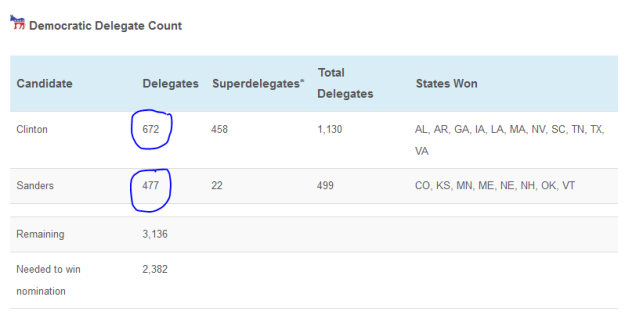 The issue with pledged delegates on the Democratic side is that they are more or less proportional- if you win, say 60% of the votes, you would expect to also win roughly 60% of the delegates. Some of the caucus states don’t report their numbers in a way that votes can be tabulated, but of the seventeen states and territories that have voted so far that we can add up votes for, this is the percentage breakdown:

Is this categorically impossible? No. Bernie clearly has the financial and enthusiastic supporter resources to stay competitive, and is still less well known than Clinton, so he has room to grow. And Clinton has often proven to be a less appealing campaigner when she’s ahead than when she’s behind, and also has investigations brewing which (based on bullshit or not) could blow up at any time. Barring something truly disruptive, though, you would be surprised to see Clinton do markedly worse in the 2/3 remaining than the 1/3 behind. And you’d be really surprised to see Sanders do 50% better.

As for my prediction about Trump before Super Tuesday, I would have to mark myself as totally wrong! It looked quite possible, going in, that Cruz wouldn’t win anything except his home state of Texas, and Rubio wouldn’t win anything. But, while Trump did quite well, Rubio won Minnesota and hung in there in other races (albeit much less well than he would have if Kasich weren’t still hanging around). Cruz, meanwhile, won several states, and racked up some more this weekend.

You can’t as readily do the kind of delegate vs. votes analysis I did above for the Democrats with the Republicans, as they have several large winner-take all states, and also have many states where there’s a threshold of 20% to get any delegates at all. However, their delegate math at the moment is:

And their vote totals have been:

In other words, even allowing for the distorting effects of Republican delegate allocation rules, nobody so far has had nearly a total vote percentage even roughly comparable to the delegate percentage total they’d need. This outlook could change if it got down to a two-person race. However, that’s not remotely likely to happen until after March 15th, since Rubio and Kasich both aim to win their respective winner-take-all home states that day (Florida and Ohio).

Another 12 states and territories will have had contests by then, including five of the ten most populous states in the country (Florida, Illinois, Michigan, North Carolina & Ohio). So, come 3/16, more than half of all delegates will have been handed out, and odds are three candidates will have major blocks, all of them needing much more to go to get to the total. If anything, at this point, I might start to put my money on a brokered convention.

1 thought on “State of the Race: Post Super Tuesday And Swell Saturday”