This election is kind of silly with Super Tuesdays, but in this case, it’s not overkill. We have the above assortment of 5 fine upstanding states, four of which happen to be among the most populous states in the union. So what happens here could indeed be pretty consequential for the race.  Here’s what we have at stake on each side.

You may recall that I made the case last week that Sanders is, mathematically speaking, a dead man walking. This was before his surprise win in Michigan, which I was certainly gratified by. So am I changing my tune? Well, I’m modifying the key slightly, but not really.

The thing about last week is that Sanders won a narrow victory in Michigan. A historically unprecedented, great news for his campaign victory, but still narrow. Clinton meanwhile won a lopsided victory in Mississippi, as she has throughout the South. It was so lopsided that, even though Mississippi is a significantly smaller state than Michigan, she ended up with more total votes and more delegates on Tuesday than Sanders, thus increasing the gap between them. Bluntly put, you can generate the best headlines ever, but if your opponent keeps scoring on you like this, you’re not going to win.

So wither my humming in a different key? This recent HuffPo piece makes a good case that Michigan presages that the next phase of the campaign is going to be tougher for Clinton and better for Sanders. We’ve all been noticing all along how lopsided her Southern victories have been. This got me mathematically curious, So I re-ran my totals from last week, honing in on the difference between Southern results and everywhere else. Overall, Clinton/Sanders are at 60/40 for vote totals so far, but if you break it down from there, it looks a bit different: 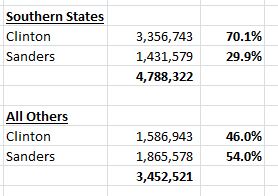 The significant thing about this is, Clinton is almost out of Southern states. North Carolina and Florida are the only ones left. so one could make a not ridiculous argument that Sanders might win a majority of votes and delegates for the remainder of this race after Super Tuesday 3. Ultimately, though, that doesn’t change the math. Right now, excluding Superdelegates, we’re at:

Sanders, meanwhile, based on where he’s done well so far, will probably win Missouri, and be quite competitive in Ohio and Illinois, maybe even score a narrow victory in one of them. I don’t think this changes the ultimate trajectory, but he now has every chance of remaining in the race, and strongly so, for the duration.

The big story here is the winner-take-all contests in Florida and Ohio. Unlike the Democrats, who generally reward delegates proportional to vote most everywhere, the Republicans have many states where the highest placing candidate gets all the delegates. In this case, interestingly, it intersects with the home states of two of the remaining candidates, Marco Rubio and John Kasich.  Unfortunately for Rubio, all signs are that this won’t work out for him:

Kasich, meanwhile, seems to have a pretty decent shot of taking his home state, and all of its delegates:

All of this is quite volatile. You can make a good case that, notwithstanding what happens in Florida and Ohio, Trump could do well enough in the other states to effectively put the whole thing away. On the other hand, you could also make the case that Cruz is close enough that, if Super Tuesday 3 ends up knocking out both Kasich and Rubio, he could still win a one-on-one with Trump. We could also have a case where, by virtue of winning Ohio while Rubio loses Florida and places badly elsewhere, Kasich becomes the surviving establishment candidate, holding down a roughly equal percentage of votes to Cruz going forward, and keeping all three of them below the threshold before the convention.

This is where the numbers stand at the moment:

Where they are at this point next week will be fascinating to see!