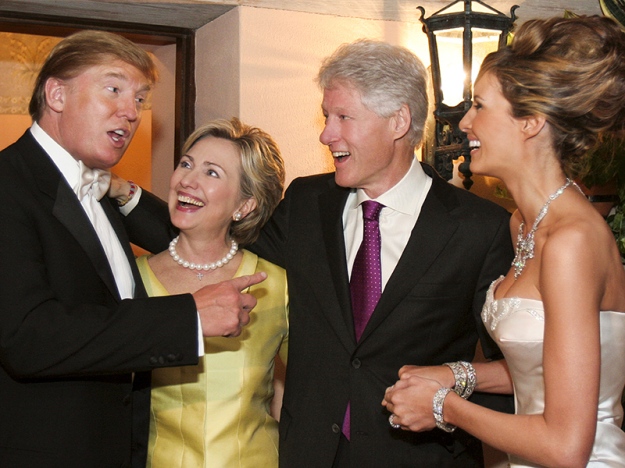 Didn’t they look so happy together? Ah, for the innocent days of 2005…

I haven’t written about the election for a while. Mostly I’ve been having a busy Summer, and trying to reserve my writing time to finish a screenplay I’ve been working on for a while so that I can get it out into the submission world, and free myself up for new writing projects.

But I’ve also refrained for the very good reason that pre-convention polls, and polls during the conventions, can be quite volatile. An event (A VP pick, an acceptance speech) cause a spike, that spike fades, and then- Bam!- it happens again. It isn’t until a few weeks after both conventions are over that you start to get a sense of how the race is settling out. So here we are, +3 weeks out from the end of the conventions. How do things look?

Clinton is still unprecedentedly unpopular for a major party nominee, with a net favorability rating of -11.5%:

You would normally associate this profile with the candidate who is going to lose the election. Except that you can see her convention did improve the outlook, and, most vitally, she’s running against a guy with a net -29% favorability rating:

Looking back over the last few elections, it’s almost a truism- the candidate with the higher favorability rating wins. And, indeed, if we look at the Real Clear Politics polling average for the period from when Trump de-facto secured his nomination after the Indiana primary through today, we see the following:

This really isn’t very ambiguous. Except for a four-day period shortly after he’d secured his nomination and while she was still slugging it out with Bernie, and another four days immediately after his convention and before her’s, Clinton has solidly led Trump in an average of recent polls. We can also see that, whereas his convention bump almost immediately collapsed, she has consolidated and maintained the several points she gained during her’s.

One could counter that this is a two-candidate average, but this year The Libertarian and Green parties could both be a factor. It turns out not to matter, because looking at the three-candidate (Clinton-Johnson-Trump) and four-candidate (Clinton-Johnson-Stein-Trump) averages, both Clinton and Trump have lower totals, but the spread is about the same- around +6% Clinton vs. Trump. And it’s not total votes, but who has enough of a margin over the others to capture a state, that determines who wins the electoral college.

Speaking of which, here are RCP’s “Leaning” and “No Toss-up” maps: 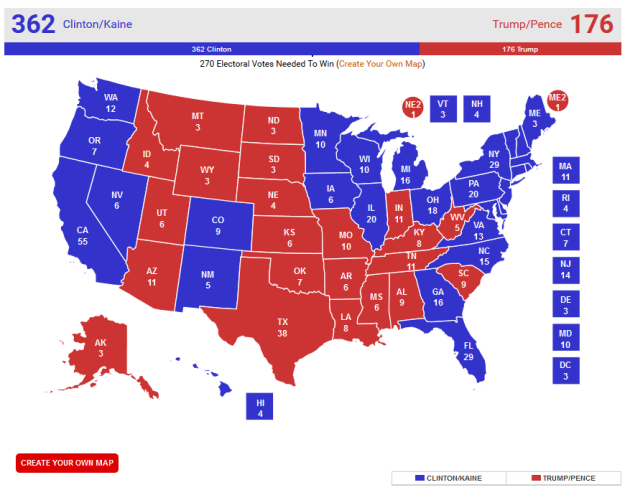 Even excluding the swing states, Clinton wins the election. Including all current state margins, she wins it by a blow-out. It’s a very tough map for Trump because, not only would he have to win every swing state (including some that had formerly been shoo-ins for Republicans, like Arizona and Georgia), he’d also have to flip back at least one blue-leaning state.

Their polls-plus model (which combines polling data with “fundamentals” indicators such as economic statistics) is a little more conservative about the size of the popular vote and electoral vote margins, but shows a similarly clear trend:

Huffpost’s Pollster, comes out with a similar result to 538’s “polls only”, forecasting an 8+% Clinton margin: 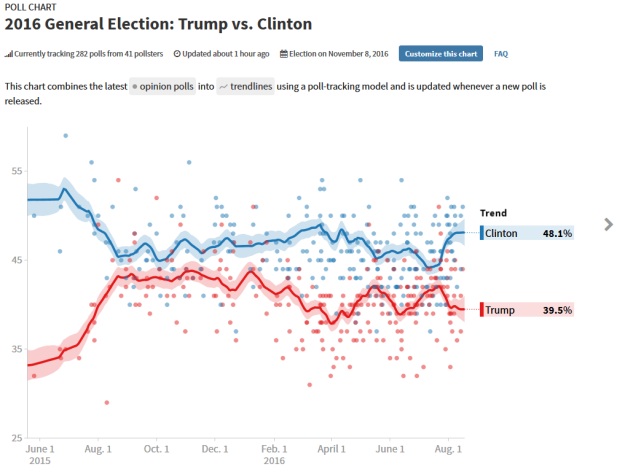 Meanwhile, 270towin.com uses the results of current state polls to run 10,000 electoral simulations a night. They have Clinton winning more than 90% of the simulations:

They haven’t had her below 80% at any time in the past few months:

The betting markets are on the same page: 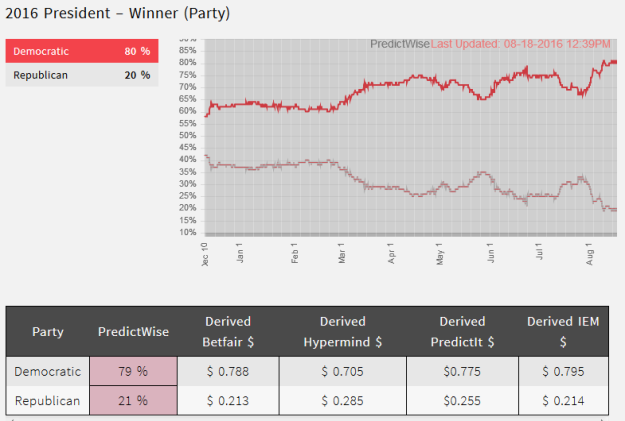 Finally, while it’s a weaker indicator than when the incumbent them self is running for election, Obama’s approval ratings also are on the side of a Democratic victory: 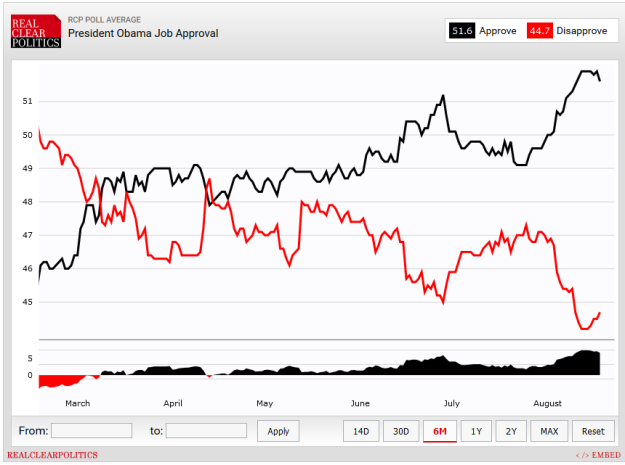 So should the Democrat’s start popping champagne corks? Well, that’s never a good idea before the dust is settled.

Nobody as far behind as Trump is at this point has won in the post-war era. But this large a point difference has gone away before (so for example, someone ahead by 15% ended up at only 8% over). FiveThirtyEight has a good discussion of this. On the other hand, Trump has named someone as combative and extreme as himself as his new campaign manager after his third campaign shake-up, even friends and allies are questioning if he even wants to win, and the party establishment is seriously considering cutting all support for him and funneling their resources into trying to hang on to the Senate and prevent the now also-shakey House majority from eroding (see one of my favorite news aggregators with today’s headlines here).

I certainly know where my bet would lie, on the preponderance of all available indicators.