18 0f 52! That’s what Goodreads says my progress is vis-a-vis my 52-book self-challenge so far this year. The latest progress coming courtesy of… 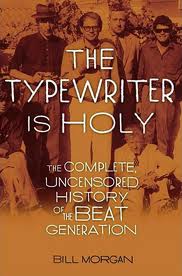 The Typewriter Is Holy: The Complete Uncensored History of  the Beat Generation  (Bill Morgan, Free Press, 2010, 352 pp.)
If you’ve read the tagline of this blog, you know I am aficionado of the Beats. As such, I have read a lot of material related to the Beat Generation and its writers- all of Allen Ginsberg’s poems, many of Jack Kerouac’s and William Burroughs’ novels and other writings, The First Third by Neal Cassady, multiple biographies of all four, and poetry by Amiri Baraka, Gregory Corso, Robert Creeley, Diane DiPrima, Denise Levertov, Michael McClure, Gary Snyder, Anne Waldman, and John Wieners. I even have one of Bill Morgan’s other books, a literary walking guide to Beat sites in San Francisco. Given all this, I’m naturally going to be attracted to a history of the Beat Generation. I’m equally naturally going to be skeptical of whether there’s really much new for me in such a history, especially one that clocks in at less than 300 pages before footnotes, bibliography, etc. But, when I found this book for $2 at a music and arts festival at the North Carolina Music Factory during a work trip to my new favorite city, Charlotte, the intersection between subject matter and price was pretty irresistible. So how did it hold up? It was necessarily very broad, almost a historical outline really. And there wasn’t a lot in it that I didn’t know. But it was useful and interesting to see all the players’ (including many of the more “minor” poets, and the often overlooked women) lives laid out in parallel. Bill Morgan, as an excellent archivist, also alerted me to several biographies and critical overviews I’d like to check out, including his own biography of Ginsberg, and forthcoming collection of letters between Ginsberg and Kerouac. I’d certainly recommend this book for anyone just getting in to the Beats and in need of a quick historical overview, and there are still treasures to be had in it even for Beaten-down oldies like me.

I actually imagine that the White House comes pre-draped, and doesn’t get redone with each incoming President. I could be wrong. Nevertheless, the point stands. While it’s certainly too early for Republicans to be second-guessing Romney, as they started to do last week, his outlook isn’t any better at 4 months than it was at 5 or 6, and Obama still seems like a noticeably better than odds-on bet. Here’s where we are currently with the daily “poll of polls” from Real Clear Politics: 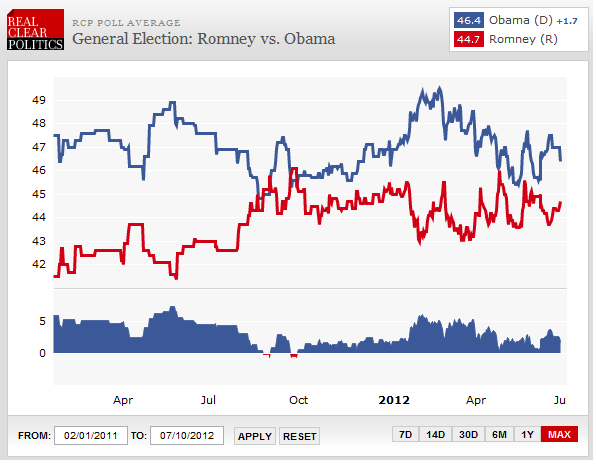 Over at the prediction market site Intrade, the Obama re-election contract is looking like this:

And FiveThirtyEight finally has their prediction model up and running. Which, of course, I am statistic-geek smitten with. It’s currently showing: 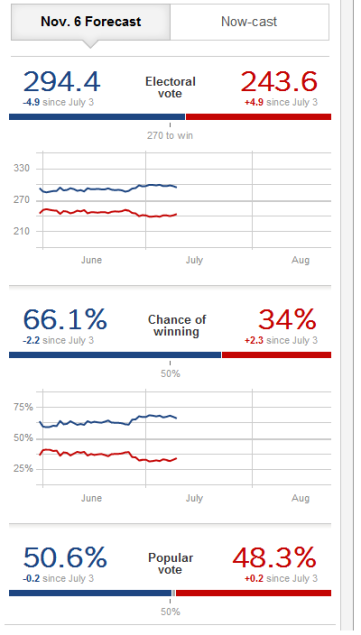 On the Electoral College front, if we take all the states where an average of recent polling shows Obama ahead we get (map courtesy of RealClearPolitics): 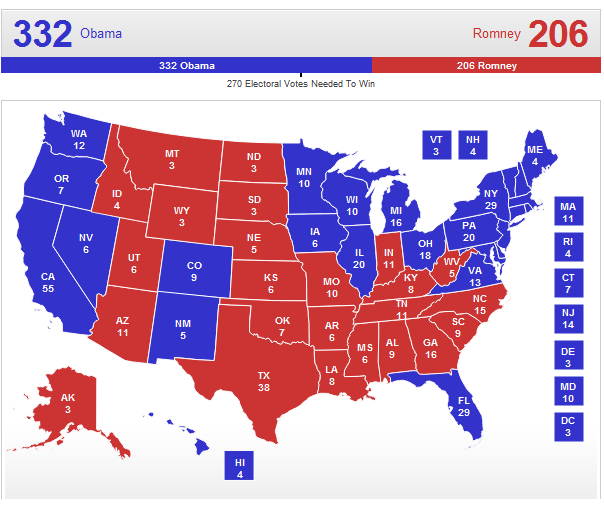 Now, I don’t really buy this, given that some states have had rather spotty polling and there are months to go. If we took the much more conservative expedient of giving Romney all the states Obama leads in but is projected to have lower (less than around 65%) odds of carrying by 538.com‘s model, the map would look like this (assembled with the “create your own map” function from RCP): 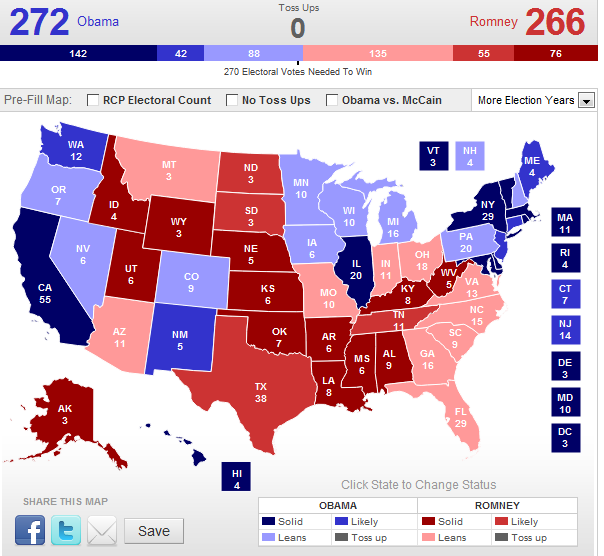 To sum up, several different kinds of predictors all show Obama to be more likely than not to be reelected, with a numerical outlook largely unchanged from a month ago or two months ago. Granted, most of the big political event news (Romney’s VP pick, the conventions, the debates) haven’t happened yet. But consider what has: Obamacare has spent more weeks publicly going through the wringer. Several months of lackluster economic news have come and gone. Romney has been outraising him. But still the dynamic persists.

And as for the argument that early Summer is too early to tell, well, it certainly is. Here’s something interesting to consider, though. Take a quick look at where the race is now compared to where it was over the same period (boxed in black) in 2004 and 2008: 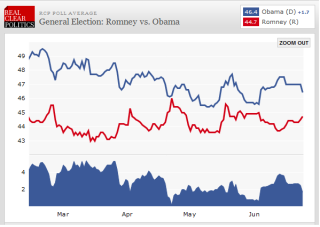 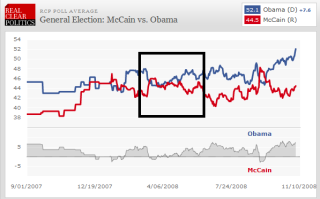 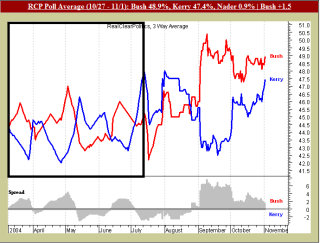 Obama, at this point, has been more consistently ahead than he was in 2008, and much more consistently than Bush was in 2004. In fact, if you refer back to the graph at the very top of this post, you’ll see that over the last year, Romeny has had the lead for a total of less than two weeks, and not at all, for even a single day, since early October. Obama 2008, while usually on top, had much more volatility, and Bush and Kerry traded leads regularly in 2004.

Will it get bumpier for him? Certainly. In fact, he’s probably due for a rough week or two right about now, given that Romney was taking lumps last week. And it will, as I said last time, be close the whole way. In fact, I was pleased to see that Gallup agrees with my observation from last month that 1976 and 2004, two close races that were competitive until the end, are probably our closest parallels for this year. But if I were a betting man, I’d bet that the RCP average, Intrade and 538.com are on to something.