Among my various ventures into activism since the election, I joined an online group where each member takes ownership of two issues. This group is based on the theory that nobody can be continuously engaged on all issues all the time. So, for our adopted issues, we each update the group on new information, issue action calls when appropriate, etc.

As an election wonk, one of my adopted issues is the midterm elections. The other I’ve chosen is keeping track of developments regarding Russian interference in the 2016 election and Trump official contacts with Russia. Being a Cold War kid from Reagan’s 80s Cold War relapse and a lifelong fan of spy fact and fiction, it was perhaps inevitable.

The good news is that I’ll be sharing my work not just with my group, but also with all of you! Below I’ve gathered some of the major news items relating to Russian interference/Russian contact, complete with links, arranged roughly chronologically, and sorted into “confirmed”, “probable” and “read this at your own risk” categories. 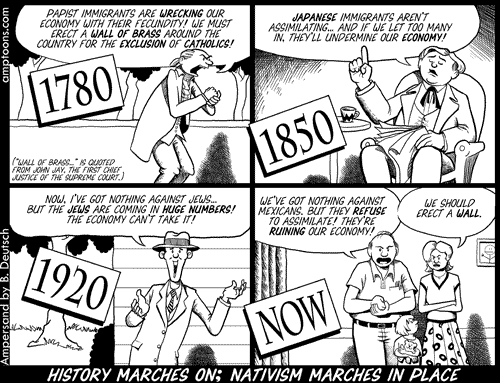 In the midst of the 2016 election writer, journalist, and astute political commentator Farai Chideya posted a draft essay on what she calls The Call to Whiteness. In her view, an appeal to White Nationalism is one of the powerful forces behind Trump’s rise, and even whites who don’t identify with it at all have to grapple with it. Because it’s being issued, wanted or not, in their name. The whole short essay is well worth reading, but I’ll highlight here the closing section:

“It thus remains very much up to white America to control the baser urges of the call-to-whiteness. You are not above it, particularly if you have not bothered to learn about it — and especially if you claim it doesn’t exist or doesn’t concern you. The call-to-whiteness is being invoked in your name. Can you hear it now? And how will you respond? The world is waiting to know.”

So, for the record: I am rejecting the Call to Whiteness.

I’d like to talk about why. There are, of course, the vitally important and obvious “whys”:

But there’s also a series of experiential reasons that the Call to Whiteness makes no personal sense to me:

I don’t pretend for a moment that my experiences equate to what it’s like to be the racial, gender, or sexual “other” in America. As a straight white male, I have experienced, and will continue to experience, many advantages and forms of ease I’m hardly even aware of. But my particular slice of life has given me an instinctive sympathy for the experience of those on the flip side of the American “Dream”.

I’m reminded in this respect that Bubble is as Bubble does. Yes, living in a multicultural urban setting constitutes a “bubble”. But, as several commentators have noted lately (here and here, for example) coming from a  rural or predominantly white world is no less of a bubble.

All of the above is why I am rejecting the call to whiteness. White friends, what about you?

While you contemplate your answer, the last word goes to a true American hero: