I really despaired of making it this far! It’s actually been both better and far, far worse than I would have imagined. But, putting aside the chance that one candidate refuses to concede the results and stirs up armed revolt, the election will indeed be over in two weeks. I’m as happy as the little pyromaniac girl in the above meme. Who hopefully is not a preview of things to come…

Hey! Do you know who usually wins a Presidential election? The candidate with higher likability. In our case this year, that translates to the candidate with lower net unlikability. But there is a clear difference, with Clinton in single digits at -9.6% net favorability, and Trump over 2x higher with -24.5%: 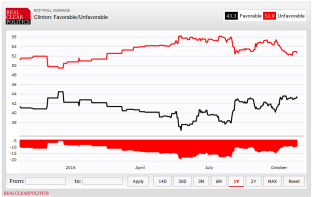 Two weeks out, you would predict on this basis that Clinton will very likely be the winner. What do the polls say? Amazingly, the same thing! Here is RCP’s polling average for the period of May 11th (the day Trump became the presumptive Republican nominee when Kasich and Cruz dropped out after losing Indiana) to today:

A word about “rigging”: Let’s say you have an average of hundreds of polls over five months by a range of media, educational institutions and private foundations, many of whom even have a house tendency to skew Republican. This average shows that the Democrat has led the Republican in an average of recent polls every single damn day except for two four-day periods, and has a lead of around five points with two weeks to go. If you see that Democrat win, you are not seeing a stolen election. You’re seeing exactly how voters have told pollsters they’re going to vote.

RCP is not the only poll-averaging game in town. HuffPost Pollster also does a polling average, to which they further make trendline adjustments. They have Clinton ahead by around 7 points: 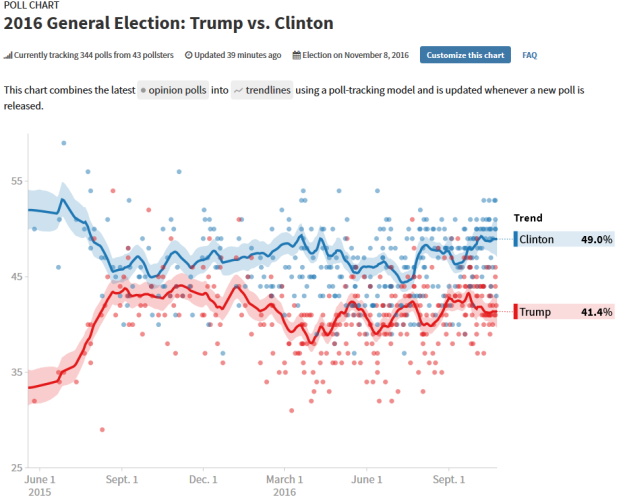 Ah, but what about that wily electoral college? RCPs map of “solid” and “lean” states currently shows a narrow Clinton victory even without the remaining swing states:

Their “no toss-ups” map expands the margin even further:

A word about “rigging”: Let’s say you have an average of hundreds of state polls by a range of media, educational institutions and private foundations, many of whom even have a house tendency to skew Republican. This average at two weeks to go shows that the Democrat wins the electoral college even without the close states, and wins it by a lot more when all the narrow leads are added in. If you see that Democrat win the electoral college by a large margin, you are not seeing a stolen election. You’re seeing exactly how voters have told pollsters they’re going to vote.

270towin runs 10,000 simulations a night using the latest state polls, and comes to a similar conclusion:

The simulation’s margins have been wider and lower at certain points, but they’ve never shown Clinton not winning:

All of the above are based on “where things are now” in some form or another, and there are still two weeks left. Nobody in modern Presidential history has come from the kind of position Trump is at now two weeks out and gone on to win, but it is worth pointing out that now does not equal Nov. 8. Forward looking models using various means of taking current data and projecting out are showing the following at 538.com:

You may notice that 538 is projecting somewhat higher odds for Trump than anyone else. if you want a really data geeked-out discussion of why, read here. Not to be outdone, an average of thousands of bettors over several betting markets are also overwhelmingly forecasting a Clinton victory:

Finally, there is the theory that an election is a referendum on the incumbent, even when the incumbent isn’t running again. If so, Obama’s net job approval rating over the last few months would also indicate a Democratic victory: 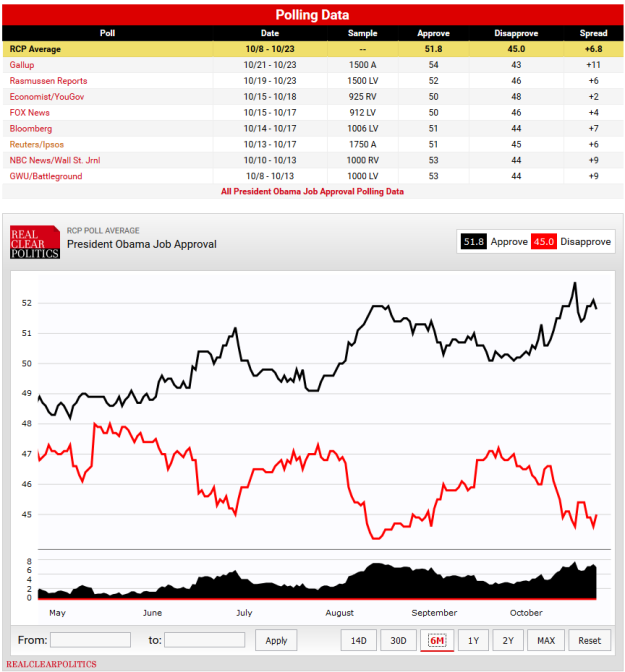 It hopefully doesn’t need to be said again, but every last indicator on the board would lead you to expect that Clinton will win. And, while the margin has been narrower at some times than others, this has been consistently true for the whole period since the primaries ended.

A sizable Clinton victory in two weeks isn’t a sign of a stolen election, it’s what you’d expect to see based on all available data.

Technically, 31 days, but that’s monthish. And, I mean, how many of us felt like we would never even make it this far? Even better than our group survival thus far, the data is now worth looking at as well.

If you recall some of our earlier analytical forays, a year out, any poll is just about worthless. At 6 months, they’re still not very indicative. By two weeks after both conventions are over, they start to be meaningful. And right about this point, 10 days or so after the first debate, they actually have a pretty strong correlation with final results. So, keeping that in mind, here’s how things look.

We’re probably now at the stage where this gap in their gaps, which has been consistent for months, matters. On the actual how-people-will-vote polling front, Clinton was already on an upswing from her mid-September lows before the first debate. Since then, her position has been further consolidated while Trump’s has turned back down:

Whereas RCP does a straight poll averaging, HuffPost’s Pollster has a somewhat different averaging method that includes trendline results, and is showing an even wider margin for Clinton:

State-by-state, the effect of this net change has been dramatic. When they were within a point of each other, her Electoral College margin was a razor-thin 272-266. The current 4-point national lead has swung several of the swing states back from pink to light-blue, and the RCP no toss-ups map currently looks like this:

270towin.com’s simulator runs 10,000 simulations a night based on averages of all recent state polling, and it has Clinton winning more than 90% of the time:

The crucial caveat is, of course, that the election is not being held today. 538.com’s model projects out the 31 days from now result based on current state polling, with weighting based on the pollster’s history of reliability and partisan bias, and further trendline adjustments based on demographic correlation between states and whether the national polls show a variance to state totals. They then run 20,000 simulations a night. Their “polls-only” model is currently showing the following:

They also have a “polls-plus” version that includes what you would expect for the incumbent party based on economic performance in the mix. As election day approaches, the two converge, since it’s assumed this is increasingly “priced in” to the polls. This model remains a little more conservative than “polls-only”, and it is showing the following:

It’s always nice to have someone else doing the math too as a sanity-check. DailyKos employs a predictive model that similarly uses regressions and trendlines, and is producing broadly similar results to 538.com:

Meanwhile, the betting markets have several thousand users who are actually ponying-up on what they expect the result to be. Predictwise.com aggregates the results from several of these markets, and they are strongly expecting Clinton to win:

Finally, we can look at the incumbent party President’s approval rating. Obama has had a net positive rating for about 6 months, has been above 50% since August, and has trended up even more strongly in the last few days:

There are other factors that we could examine data on: Clinton has a strong edge over Trump in field offices in key swing states, while Trump is doing very well with White Men without a College Degree, he is actually doing worse than Romney among White voters overall, and the uncertainty in the forecasts is decreasing as fewer undecided and third-party voters remain. These factors, and every one of the above indicators, signal that Clinton remains the likely winner.

Could there be an unexpected change? Always yes. But Wikileaks has pretty much fizzled out on having an October surprise up its sleeves, the pluses and minuses of both candidates are well known, and high-magnitude changes at this stage of a campaign are unusual. We’ll check in again on October 26th, and see how it looks with all three debates concluded, and only two weeks remaining!