Yes, that image is from 2008. But it so Super-well combines two of my loves, Presidential Politics and Comics, that I had to do it. You may have heard that this Tuesday is Super. Some election cycles it’s more super, some less so, but this year on both sides the calendar is so front-loaded that half of all the delegates will be chosen by the end of March. So this kickoff with more than a fifth of the states in the Union voting on the same day is pretty significant. In fact, I think a good case can be made that both nominations will effectively be decided tomorrow…

Sanders had been hewing pretty close to what I pegged in my first election blog of the year as his “best case”: “he wins Iowa, then New Hampshire, and does better than-expected in Nevada and South Carolina, and goes on to get a striking distance 40% or more of the states and delegates on Super Tuesday”. Until Sunday, when he lost South Carolina by almost 50%.

The campaign made a deliberate decision over the past week to basically concede the state, and concentrate resources on making as big a splash later in March as possible. It’s an understandable strategy in a case where you know you’re going to lose a state anyway and so does everyone else. But there’s “lose” and then there’s “get obliterated”. 538.com has an analysis suggesting that, if he performs as poorly with Black voters on Super Tuesday as he did he in South Carolina, even if he wins several other states, Clinton may do so well in the Southern states with larger delegate totals that she’ll open a delegate lead he just can’t catch even if he has upside surprises later in the month.

Another way to look at is to work backwards from the national numbers. Currently the averages show the following: 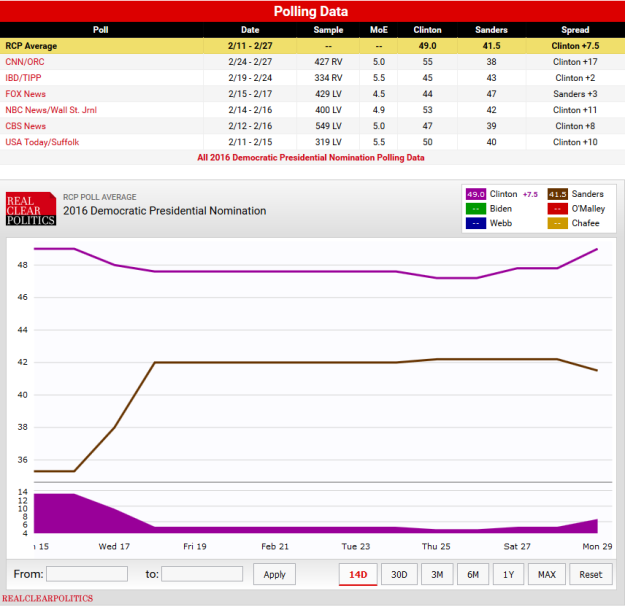 These numbers are kind of so all over the place that you can wonder what’s up, but it does look like the momentum is tipping back to Hillary. If you take the old data analysis trick of removing the highest and lowest (Clinton ahead by 17 and Sanders ahead by 3) and averaging the rest, you’d still come to the conclusion that Clinton is ahead by about 6% nationally. Over at 538.com, Nate Silver has a pretty sophisticated analysis indicating where Clinton and Sanders would be state by state if tied nationally. Let’s zoom in on the “Super Tuesday” portion of that:

If, instead of being tied, you assume Clinton is ahead by 6 points nationally, you’d expect Sanders to win Vermont, Minnesota, Colorado, and Massachusetts, and Clinton to take everything else. Since everything else in this case includes some very populous states, her delegate haul from that would put him far enough behind that he would not only have to perform, but outperform the rest of the contests to catch up. This is pretty much what Obama did to Clinton in 2008, and she was unable to rally back even though she stayed competitive the whole time, with several big wins along the way. And if Sanders doesn’t even manage to capture all four of those states…

Clearly he has the money and the core supporter enthusiasm to stick it out throughout March and well into April. And even if he does slip as I’m outlining here, I’d expect some surprises in March and April that will lead to “Sanders is back!” headlines. But the mathematical path forward is hard to see unless he really outperforms tomorrow.

If I think it’s starting to smell like Clinton pulls into an uncatchable lead tomorrow, this is doubly so for Trump. The Republicans have even more states on the docket than the Democrats do:

Some of these states haven’t had any recent good polling. But if you look at the RCP run-down of the ones that have, you’ll immediately see that Cruz has a lead in Arkansas and his home state of Texas, but everything else is coming up Trump. If Cruz isn’t performing better than that in the Southern states that should be his strongest, it’s hard to find a plausible scenario where he overtakes Trump later. Rubio has a somewhat more conceivable path, namely that if he can get himself into a one-on-one with Trump, he can start winning some of the large and more moderate “winner take all” states that are coming up later in the calendar.

Except, Cruz has every incentive to see how many delegates he can build up through the end of March, and Kasich is showing every sign of refusing to clear the stage for Rubio at least until his home state of Ohio votes  on March 15th. By then, Trump will have cleared enough of the board that he will be very hard to catch. We may know as soon as tomorrow if Rubio and Cruz are effectively unable to catch up. They could still stay in and keep anyone from getting enough delegates to take it before the convention , leading to a floor fight there. But the major donors are already showing reluctance to spend against Trump, and he’s getting his first establishment endorsements. The party may decline to join their fight, and instead get on board with Trump.

Tune in tomorrow, and we shall see!