So here we are, having finally cleared the last debate, with less than two weeks standing between us and finally, actually, choosing the next President. When I wrote my first post-primary review almost five months ago, this day seemed wearyingly far away. I was expecting one of the longest, nastiest campaigns ever. Instead, we’ve gotten one of the most vapid. And this is where it’s left us, a VP-pick, two conventions and four debates later (map from HuffPost Pollster):

For those of you just joining us, here’s what’s happened so far:

Mitt Romney ran a pretty uneven campaign and Barack Obama ran a pretty good one throughout June and July, during which Obama usually held a  2-3% lead. Then a combination of Obama doing Romney in with a neo-Swift Boatian barrage of advertising tearing down his business past and Romney doing himself in with his mouth during his foreign trip led to an early August gap that reached 4 points at its height. By virtue of a VP pick that galvanized the Conservative base and a solidly serviceable convention, Romney deflated the Obama bubble and inflated his own numbers, bringing it to a tie by the beginning of September. The Democrats then had a very good convention (though, shades of trouble to come, Bill Clinton made a better case for Obama there than Obama made for himself) that shot Obama back up to a 3+ point led. Then, incredibly, by opportunistically pouncing on the Libyan attack and standing behind his “47%” comments when they were leaked, Romney let Obama hang on to that lead for about a month, and grow it even further. Enter talk of a Democratic blowout victory.

Except, in contravention to all conventional wisdom about debates having minimal impact, Obama had just about his worst night ever on the same night that Romney had one of his best at the first debate. This turned what was a natural rebound for Romney and cooling off of Obama’s highs into an out and out surge for Romney and collapse for Obama. Enter talk of Obama being toast. Any time you see a sudden swing you can expect it to back off a little, and it’s done so, no doubt aided by Joe Biden proving the party still had some fight left in it at the VP debate, and Obama deciding to show up this time for the second debate. The new normal now appears to be Obama stabilized, and Romney much stronger, giving Romney a small but persistent polling lead. You could make a case that the third debate will further attenuate this, but probably not much further in Obama’s direction than an even closer near-tie.

It’s good to keep in mind that current numbers need to be taken with a grain of salt. For one thing, RealClearPolitics builds its average off of whole numbers, such that, for example, an ABC News/Washington Post poll released today is listed there as Romney 49%, Obama 48%. But, in fact, far from being a 1% difference, it was actually a .07% difference, with the raw numbers 48.51% to 48.44%. RCP hasn’t done anything deceptive by doing this, they just have a rounding standard, and they followed it. Issues of which polls they select to list and which they don’t are potentially more troubling, and have led to accusations of bias in the past. Rather than saying yea or nay to them specifically, we can observe an alternate data point, both in wider poll selection and precision of presentation, from Mark Blumenthal at HuffPost’s Pollster: 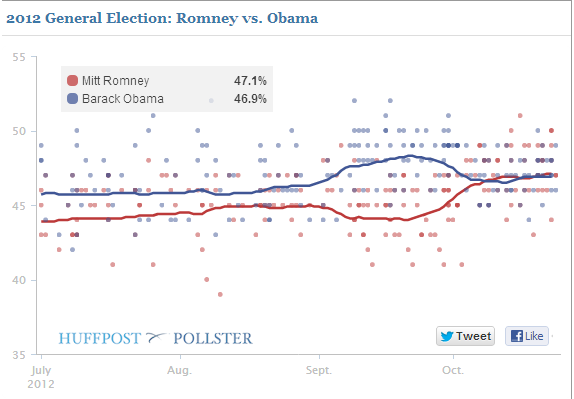 Grains of salt 2 and 3: The election does not happen today, and it is actually 51 separate elections, in 50 states + DC. Nate Silver at FiveThirtyEight takes this into account by doing a projection based on current polls, past trends, and balancing national polling with state by state totals. His model was very accurate in 2008, and his current forecast for Nov. 6th is a 1.1% popular vote victory for Obama:

By far the largest grain of salt, however, is that the popular vote doesn’t determine who becomes President, who gets 270 votes in the electoral college does. This is, of course, well know, but it can be dramatic how much the two can differ. Al Gore was ahead by 0.5% nationwide in 2000, but lost due to narrowly losing Florida. If John Kerry had gotten about 60,000 votes more in Ohio in 2004 and George Bush around 60,000 less, Kerry would have become President even while losing the popular vote nationally by almost 3 million votes. And the current state of the electoral vote? Even as it shows Romney ahead by 0.6% in polling, RCPs “no Toss Ups” map of all current leads looks like this: 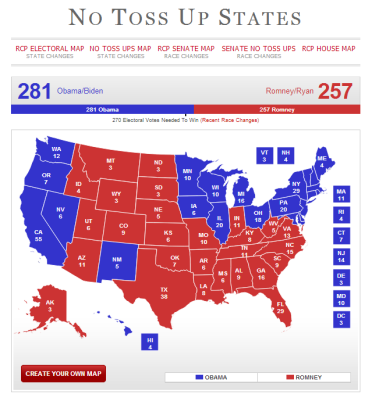 Similarly, over at HuffPost Pollster we have an estimated current lead of well over 270 with the most likely states, and a total of 303 with all leads: 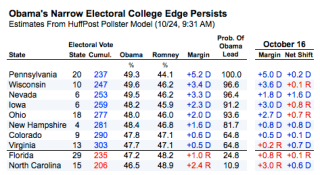 Over at 270 To Win, they run 10,000 simulations a day based on current state polling numbers. Their electoral college results for today:

And on the forward looking side, Nate Silver’s electoral college forecast current shows:

Any way you slice it, Obama looks like he has a narrow, but totally sufficient, electoral college edge even with national polling that puts him slightly behind. In the June 2nd post I mentioned in the opening above, I wrote:

“I don’t see anything fundamentally changing the picture that points to an ongoing nearly break-even that eventually (and narrowly) breaks for Obama.”

It’s even narrower than I thought it would be, but I still stand by that prediction today!