This, apparently, is my 29th posting on the election over the past year! We were all so young and innocent when I kicked off my coverage, and followed with my first bit of electoral numerology. And now here we are, with a week to go.

At the moment, the popular vote looks like this:

All of which doesn’t really tell us a lot, for two reasons:

1. RealClearPolitics, as you’ve seen above, currently has Romney in the lead by 0.8%. But the 8 polls that average is made up of currently have an average margin of error of 3.13%. Even if you assume that pooling them together cuts the collective margin of error, say, in half, it would still be around 1.5%. So Romney and Obama’s separation is well within that margin of error. I.e. the margin we’re seeing could just as easily be the product of statistical noise.

Similarly, HuffPost Pollster’s numbers have Romney ahead by 0.7%, but their estimate of their model’s margin of error is around 1.2%. Once again, Obama could just as easily be ahead. Or Romney could be further ahead than he seems. Or they could be nearly exactly tied. The point is, the numbers are so close together that they aren’t really useful in distinguishing which of these it is.

2. As David Rothschild helpfully reminded all us poll junkies today, the popular vote doesn’t actually matter. The electoral vote determines who is elected President. RCP, the aggregator of the three featured here that currently has the widest Romney margin, has a no toss-up electoral map that looks like this: 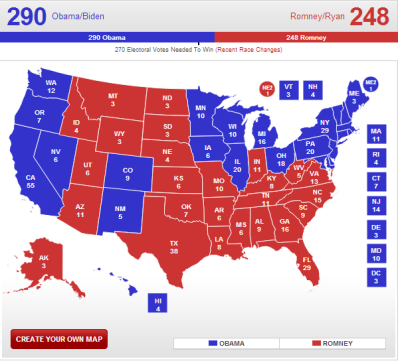 So, that’s that for margin. But what about momentum? We’re looking at what the numbers look like today, but what matters is what they’ll look like a week from now. Does one of the candidates have significant momentum? To get a handle on this, I crunched some numbers.

If we compare the popular vote numbers at RCP, HuffPost Pollster and TPM for today versus a week ago, we see:

If you average the three (which are themselves averaging multiple polls, and adjusting their mix in various ways), it would seem that both candidates have, at best, a smidgen of momentum, and Romney’s is a bit larger. If you rolled the change over the last week forward another week, we’d be at Romney 48, Obama 47.4. Then it would all be about how the remaining undecideds split. Even if they split disproportionately toward Romney (and there’s good historical perspective and recent analysis that casts doubt on that), we’d probably still be looking at something that’s within one percent.

But wait, you say, didn’t I just maintain that the popular vote doesn’t really matter? Why yes, yes I did.

So let’s do a similar analysis on the swing states. The below looks at the swingiest of the swing states, where current margins are withing 3%. I took numbers from RCP and HuffPost Pollster, since both have nicely updated state by state projections, and did the same analysis of today’s numbers versus a week ago. For compactness, I’m representing the margins between Obama and Romney here, with plus Obama as a positive number and plus Romney as a negative number:

Looking at the average, Iowa and New Hampshire have the most significant-looking potential swings (>0.5%), but in opposite directions, New Hampshire toward Obama and Iowa against. The others don’t show a lot of evidence of momentum beyond what might just be statistical noise. Let’s say you take all the swings over the past week, and roll them forward another week. Even if you build an electoral map where you only assign Obama the states that would be projected to be for him by more than 1%, the map looks like this:

And 270, of course, wins it, even if nationally you’re behind by 1 percent. And if Iowa, Colorado and Virginia squeak past the line for Obama too, it could even get up to 303.

My take? I learned a hard lesson in 2004. I consumed loads of analyses about how Kerry might be stronger than it looked in the home stretch, polls might have sampling biases that underestimated his position, the undecideds might break more for the challenger. I convinced myself that it could be true. In the end, it turned out just as the numbers were saying: final polling averages for Bush indicated a 1.5% lead, and he ended up winning by more than 2%.

I believe what the numbers are saying now too. Obama will likely lose the popular vote, or, at best, finish ahead by the tiniest fraction. Either way, the margin will be within 1% or so. But Romney will equally likely lose the electoral vote, even if he leads Obama nationally. Exactly 7 days from now, we shall see if I was right!