All right, so, on the downside, I haven’t updated my Goodreads 2012 reading challenge progress in a while (currently 26 out of the 52 goal by the way). On the plus side, though, my delay has given this review some range. For a couple of years now I’ve had the practice of rotating my reading between fiction, nonfiction and spiritual. I also am reading at least one poetry collection at any given time. Today’s review will have examples of all four! 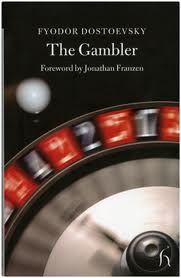 The Gambler  (Fyodor Dostoyevsky, 1867, 100 pp.)
Some years ago, I was taking a writing workshop. When it became my turn to present excerpts of a novel I was working on that involved sexual and romantic addiction, one of the other participants commented that she almost stopped reading, because it seemed too prurient. But then she continued, and said it reminded her of The Gambler. That was both one of the most gratifying things I ever heard in a writing workshop, and the source of a mental footnote to check out Dostoyevsky’s- Really long short story? Rather short novel? Novella? -one day. And what a great day it has turned out to be! I always marvel at his ability to write from the point of view of a thoroughly un-admirable character and yet remain sympathetic and compelling. That is in fine display here, and in fact the whole piece seems to be devoid of any admirable characters at all. And yet the descent into obsession (and one could argue that a love addiction precedes any gambling addiction for him) of the young Russian tutor and the tangled fortunes of the Russian aristocrats he works for as they vacation at a German resort is so tenderly and accurately rendered that it works. Nobody presents the darkness of the human heart with as much love and forgiveness as Dostoyevsky. There is obsidian humor and twisted beauty throughout this small masterpiece, and I thoroughly recommend it.

The Report on Unidentified Flying Objects  (Edward J. Ruppelt, 1956/1960, 260 pp.)
When I saw that I could download this classic of Ufology for a pittance on my Nook, I was very excited. Edward Ruppelt was the head of the Air Force’s UFO investigation, Project Blue Book, from 1951-1953. After leaving that post and retiring from the Air Force, he wrote a book reviewing his tenure. And it makes for very fine reading- I was particularly impressed by his fluid conversational style, it kind of makes we wish he’d written more before his untimely death from heart attack at age 37. Or, you know, lived more. Throughout the book he maintains a great balance between irresponsible credulity and knee-jerk skepticism, and in fact derides both. What one comes away with principally is three things. 1. Because of bureaucracy and miscommunication, the Air Force’s attitude toward the investigation, and the resources devoted toward it would often lurch in different directions. This produced a lot of the behavior that outside observers attributed to “cover-up”. 2. When the investigation was taken seriously and conducted thoroughly, a lot of seeming mysteries could be identified, but a significant portion of unidentifieds remained. 3. These undientifieds never produced the kind of “proof” that could definitively settle the question of what they were (you can sense his frustration with this intangibility growing throughout his tenure with Blue Book), but many unknowns had excellent, multiple witnesses, and were clearly things outside of any conventional explanation. This is where his original analysis in 1956 more or less ends up. The 1960 edition includes an additional three chapters that have always been controversial since they A) are much more skeptical and B) came out just before his death. Reading them here, I have to say, it is notable how they not only strike a totally different tone than his original ending, they actually put forward multiple statements directly contradicting positions he took earlier, with little explanation of the change in his thinking. I’d be curious to see the last three chapters put through some kind of word-choice/sentence structure analysis to see if the same person even wrote them. And on that note, I will leave you with the mystery!

The Song of Eve: Mythology And Symbols of The Goddess  (Manuela Dunn-Mascetti, Simon & Schuster, 1990, 239 pp.)
As documented in earlier reviews, in the last few years I’ve become increasingly interested in exploring the feminine side of the divine.  So when I came across this book at a Friends of the Library used book sale in San Francisco a few years back, I eagerly snatched it up (especially eagerly at the price of $3!). Well worth it-the book itself is lushly beautiful, full of color illustrations drawn from classical and contemporary works of art. These are used to visually highlight the text, which utilizes the structure of Jungian archetypes and examples from throughout world mythology to explore aspects of the feminine, and relate them back to passages and stages in life. While I did feel a little gender excluded from the party at times since it is explicitly written to address women navigating the stages of a woman’s life, I found a lot that was moving and meaningful to anybody leading a human life. And one can hardly begrudge making women the focus here as a counter-point to a few millennia of male-dominated spiritual institutions. A beautiful book, inside and out.

At The Drive-In Volcano  (Aimee Nezhukumatathil, Tupelo Press, 2007, 85 pp.)
As I said, I’m always reading at least one volume of poetry. Sometimes I have a pipeline built up, but in this case, I was without follow-up when my previous volume wound down. Browsing at a bookstore, I was drawn to this volume by the candy heart on the cover and the poetry of the poet’s name. It also had a plug on the back by Naomi Shihab Nye, who I’ve become a fan of lately. I was not misled- the 57 poems in this volume beguile with their mix of travelogue, journey through a personal past and present, and unashamed mixture of pop culture and more mythic sources into the trip. Aimee Nezhukumatathil has pulled off a mixture that I myself often aim for in my poetry. Which is not just inspiring, but also moving, and really darn pretty to read.
And there we are! It seems unlikely to me that I’m going to hit 52 books, with only two months to go. But hey, I’m not giving up, and you always get further with an ambitious aim than with no aim at all…