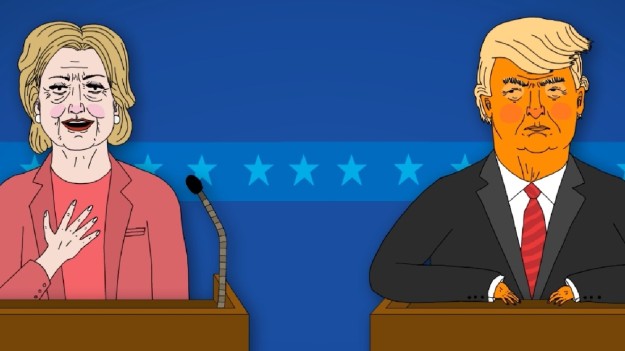 Good news for my blogging life! I’ve finished the final draft of my screenplay (at last!) and it’s starting to make its way out into the world of submissions. Which should free me up to return to more regular blogging.

As it happens, this is a fortuitous time for an update on the election- we’re 45 days from the finish line, on the eve of the first debate, and have a body of polling that’s now fully absorbed the reaction to Clinton’s “basket of deplorables” remark, and her giving fuel to the ridiculous Healtherist fire by fainting from (and not immediately coming clean about having) pneumonia. So, how do the numbers look?

A popular (and pretty reliable) shorthand is that the relatively more “likable” candidate usually wins. It’s a bit hard to gauge in this case, since Clinton has a historically unprecedented double-digit net unfavorability:

This would normally be the kiss of death, except Trump’s has consistently been even higher, and remains so through today, even after Clinton’s bad news stretch: 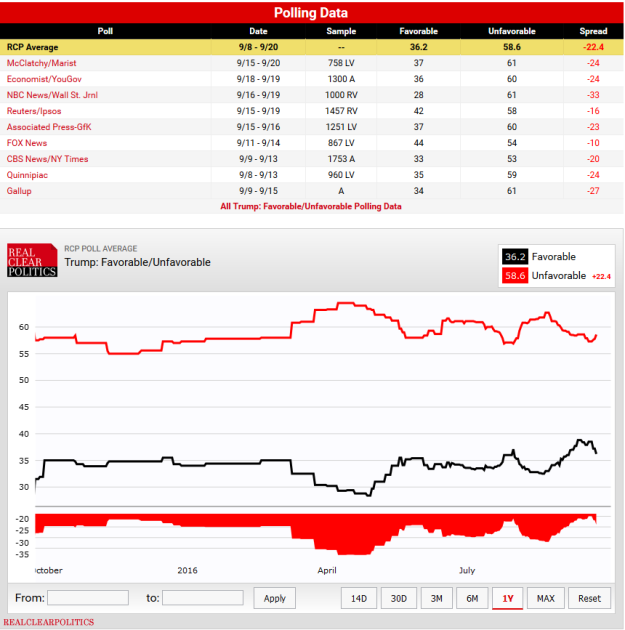 Of course, what actually happens in an election is that people vote, not weigh in on favorability. Looking at the RCP polling average, you can certainly see that Clinton’s bad weekend cost her:

At one point, her average margin over Trump was down to 0.9%. Since then, though, it’s started to expand again. But guess what? It isn’t actually about how people vote! Or rather, it is, but in specific states, depending on how they add up in the electoral college. Here, the shifts of the past two weeks have turned several of the light blue swing states pink, leaving Clinton with only a narrow margin:

Now, there are a few ways to look at this. You could make the case, as RCP analyst Sean Trende does, that Trump behaving exceptionally well under the influence of his new campaign team and Clinton having a horrendous week, combined, still weren’t enough for him to pull ahead. Or you could make the case, as 538.com does, that indications of Clinton’s polling rebound are mixed, and her reliable states are only just enough to get her over the electoral college finish line.

Speaking of 538, their “polls-only” model, crunching all state and national polls, making adjustments for polling firm track-records of of reliability and distortion toward one party or another, trending them forward to election day, and averaging the results of several-thousand trail runs, shows the following:

In other words, on average, Clinton carries the popular vote by over 2%, and has a fairly narrow electoral college victory. Her reliable states are the same 272 that the RCP average shows, with Nevada and Florida being pretty close to 50-50 (as indicated by their being light pink). If her polling numbers improve a percentage or two from here, her electoral map gets more solid. If they decline, it stays razor-thin.

Their “polls plus” forecast also weighs economic fundamentals into the forecast. It’s typically a bit more skeptical than polls-only, since the economics indicate more of a 50-50 shot for the incumbent party. However, it weights the economic factors less strongly as election day approaches, figuring everything is more “priced in” to the polls by then. Currently, it’s not too different from “polls only”:

HuffPost’s model does something similar, combining weighted poll averages with trend-lines, and it has Clinton ahead by around 4 points:

270towin.com runs 10,000 simulations a night based on the latest state polls, and it currently shows Clinton winning the majority of those simulations:

The summary of betting markets at predictwise.com is still pretty bullish on Clinton winning:

Finally, the popularity of the incumbent party can be an indicator. It doesn’t have the greatest track record in years when the incumbent isn’t running for reelection, but is still worth looking at. Obama’s approval numbers shifted into net positive in March/April, and remain fairly strong today:

One thing that I think is important to keep in mind is that, even on a strong run for Trump and coming off of a bad one for Clinton, there isn’t a single indicator on the board that has him ahead. Based on all available data, if the election were held today, you would expect Clinton to win. Somewhat narrowly, but win nonetheless. Unless the debates make things markedly worse for her, or notably better for Trump, the advantage remains Clinton’s.

We’ll tune in to the numbers again on October 7th, at which point we’ll be two weeks past the first debate, a few days after the VP debate, and a month away from the General Election. See you then!