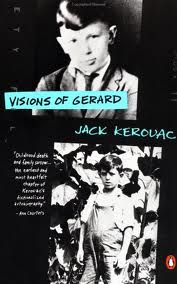 Do you know what a New Year calls for? A new literary resolution! For this year, mine is to read the full works of someone who’s long been one of my muses, Jack Kerouac. I remember late nights up in my parent’s living room while home on college break, reading his works, and biographies of him and the other Beats. Sneaking vodka from the bottle I had hidden in my suitcase, mixing it with kool-aid at 1 AM and reading, my head aswirl with the words (and the vodka), dreaming of literary greatness.

That, of course, was an adolescent dream, and not coincidentally a preview of bottoming out myself nearly two decades hence. But it was also significant in awakening my literary ambitions and poetic vision, and he and the Beats remain a touchstone for me to this day. It is impossible to overestimate the influence they’ve had on creative output in all genres since the 50s, the way they made space in American literary life for subjects and points of view that had been ignored and/or forbidden. And personally, I’ve found that the depths of their vision, and meaning and warnings of their lives, keep revealing new facets to me as I get older.

So here I am at 42, only a few younger than Kerouac when he died, and at the perfect age to discover the secret of Life, the Universe and Everything. It seemed like an opportune time to look back. In brief, what I plan to do is read all the works he meant to publish (as opposed to the flood of sometimes questionable posthumous editions), plus a select one or two more. Furthermore, I’m going to read them in the order of the main subject he himself choose, the chronicle of his life. That is, I’ll read them by the period in his life they cover, rather than when they were written.

In more depth, the works I’m going to try to complete are (with the year they were written, and the period of his life they cover, listed after):

I’ve just completed the first of these, Visions of Gerard. Though written in the mid-period of his career, during his mid-50s peak of output, it actually covers events in the earliest period of his life, the death of his older brother Gerard when he was four. It is a profoundly melancholy little book, just 130 pages. I actually had trouble getting in to the reading at first, since it comes from one of his most experimental periods, but once I was in, it had amazing depths. It is equal parts nostalgic childhood reminiscence, exposition on the ephemeral nature of life, and exploration of the birth of his own psyche. He presents his dying young brother as a sensitive youth prone to mystical vision. But of course, he’s also presenting himself in this portrait, as he even says, “At that age I was Gerard.” I’m realizing reading it that Kerouac’s sense of the bleakness of this life,  mystical superposition of this realm and realms beyond, and desire to let everyone know about how close liberation lies began at a very young age. Of course some of this is written on to events after, but he’s clearly getting at the root of how he saw the world here too. A special additional pleasure for me, now that I’ve been living on the North Shore of the Boston Area for a year and a half, is the portrait of Lowell in the 20s. I can feel, smell and taste things in his descriptions that might have escaped me before.

Next, I’ll continue his portrayal of early life in Lowell with Doctor Sax.

1 thought on “Year of Kerouac: Visions of Gerard”