31 out of 52! Well, I’ve learned that these things can be very valuable once you let go of self-flagellation if you don’t make it. Because the thing is, you end up achieving more with an ambitious goal, even if you fall short of it, than if you aim low. I’ll keep it brief here, since I haven’t done an update in a while. The final books were: 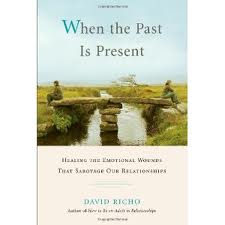 When The Past Is Present  (David Richo, 2008, 224 pp.)
A friend recommended this to me two years ago or so, and I’m glad I finally got around to it. David Richo uses conventional psychology, Jungian psychology and Buddhist concepts to explore how issues from childhood and past relationships can cloud our present relationships, and how we can learn to recognize and process them so we can be truly present. If I hadn’t already done A LOT of this kind of work in the past few years, this book would have landed on me like a thunderbolt. It strongly affected and challenged me as it was. Recommended for anyone who has had issues with unresolved issues from the past affecting the present. In other words, everyone.

Sliver  (Dave Morrison, 2008, 108 pp.)
Here’s the deal: If you’re a 40ish former rock musician from New York & Boston who currently lives with your wife in my dreaming-of-living-there state Maine, and I run across your book during a trip to Portland, Maine just as I’m ready for a new volume of poetry, I’m going to get it. As it turns out, in subject matter and sensibility, Morrison is my kind of poet even if the form of his poetry doesn’t always work for me. 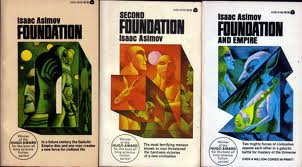 Foundation Trilogy  (Isaac Asimov, 1961, 678 pp.)
We’d read several things by Asimov in my late great Sci-fi Book Club, but we never got around to this, widely considered to be one of his masterworks. About the only thing I can say about it that isn’t superlative is that the dialogue ends up sounding a little dated (1950sish, in fact) at times. Otherwise, you have an epic sweep of future history, political intrigue, twists and surprises, and, as always, Asimov’s shrewd and compassionate understanding of how people are.

Powers: Roleplay  (Brian Michael Bendis & Michael Avon Oeming, 2001, 110 pp.)
If you have a fondness for superhero comics and you haven’t read Powers yet, I highly recommend it. The series centers upon a pair of cops (one of them with an intriguing secret past) who investigate crimes involving super-powered individuals. In this volume, they’re investigating the murders of a group of college kids who were role-playing superheroes. Bendis is a superb writer, Oeming is a superb (though highly stylized) artist, and the whole thing is just fun. Get on board!

Ultimate Spider-man Ultimate Collection II  (Brian Michael Bendis & Mark Bagley, 2009, 308 pp.)
And here have Brian Michael Bendis’ second appearance on this list, in a volume that brings together issues 14-27 of Ultimate Spider-man. Marvel’s used-to-be-great “Ultimate” line took characters from Marvel’s mainstream Universe and retold their tales in a setting stripped of the main continuity’s decades of story-line, giving things a chance to be fresh and new again. So here we get Peter Parker back to his roots, a teenager learning the ropes as Spider-man while also dealing with crushes, bullies and high school, and in a more modernized setting. Good clean fun all around, including the most realistic portrayal ever of what would really happen if the totally-human Kraven fought the strongly super-powered Spider-man. My only complaint is that the teen love melodrama got a little needlessly thick at the end. Ah well, kids. What can you do?

JLA Vol. 1: New World Order  (Grant Morrison, Howard Porter & John Dell, 1997, 93 pp.)
Let’s not dodge the truth: for a lot of the 70s and 80s, DC sucked. Then, starting in the 90s, several creators stepped in, remembered that they were dealing with the world’s greatest heroes, and started to have fun with them again. Grant Morrison’s work with the JLA was one of the signposts of this, and here we have the first volume of his run as writer for the group. The artists, well, let’s just say they haven’t quite caught up yet (that will come later in the series), but the tale is solid good old-fashioned fun.

Superman/Batman Vol 6: Torment  (Alan Burnett, Dustin Nguyen & Derek Fridolfs, 2009, 160 pp.)
I do love my Superman/Batman. They’re both such icons, and there’s so much that somebody who understands how to bring out the contrast between them can do, purely in terms of characterization, to make a great story. Throw in some cosmic shenanigans and great artists, and you get a grand tale here. It’s marred a little bit by tie-ins to the most recent grand Universe-shaking hullabaloo that DC was doing at the time, but otherwise is a rollicking good time.

So there we are for 2012. And what’s on the docket for 2013? (But first, let’s pause here for a second to say, “Holy crap! It’s going to be 2013! How did that happen? And are there flying cars yet?”) I don’t think I’ll be doing the Goodreads challenge again, instead I’ll be challenging myself to read the collected works of two of my muses, Jack Kerouac and Allen Ginsberg. To whit, Ginsberg’s collected poems 1947-1997, and all the works Kerouac published in his lifetime, plus two published after. More description to follow…