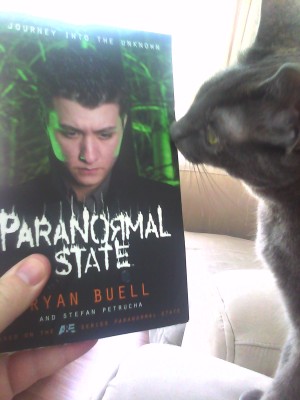 Paranormal State  (Ryan Buell and Stefan Petrucha, A&E/It Books, 2010, 372 pp.)
I just finished reading the book pictured above, but I have not yet identified the apparition that appears in the photograph. Regardless, I thoroughly enjoyed it! As a fan of the show (and the whole 2000s paranormal research TV bumper-crop- Ghosthunters, Destination Truth, Fact or Faked, et al), I was already well-disposed going in. But being as the whole thing could have easily gone in a cheesy or sensationalistic direction, it was a special pleasure to find it both down to earth and balanced. It’s hard to know with a co-written work how much of Ryan’s voice actually comes through, but it certainly feels like the guy that you see on the show- shy, humble, and as interested in helping his clients as he is in exploring the unknown. It’s also nice to see his skepticism in play- being leery of psychics and mediums unless they bring compelling information, talking about the uncertainties of interpreting evidence from the equipment, and pushing himself and his clients to look for alternative explanations instead of just assuming everything that goes bump in the night is genuinely paranormal. It’s also nice to see that, while he’s very up-front about how his Catholic faith informs his interpretation of cases, he’s not at all doctrinaire about what’s behind the phenomenon he encounters, and discusses multiple possibilities of what “the unknown” might be. The book largely consists of the behind-the-scenes story of the series being accepted by A&E and the filming of the episodes from the first season. It’s definitely interesting to see how several days of preparation and 48 hours of investigation get turned in to a half hour episode, and all the complexities that get “smoothed out” in the storyline as aired. As a paranormal geek and a film-production geek, I really enjoyed that perspective. Along the way, there are some nice side articles on the history of paranormal investigation, topics in research (including psychological phenomenon that are often mistaken for being paranormal), and interviews with the team. My favorite parts, though, were the insights into who Ryan is and why he does what he does. If I have anything resembling a “criticism”, it’s that I’d like to have seen even more of that. As it is, if you’d like a book on the paranormal from a believer’s perspective that still makes room for skepticism, with a conversational tone and a great big heart, I’d recommend Paranormal State.