As you may have heard, Rick Santorum dropped out of the race yesterday (or, technically, suspended his campaign). With Newt Gingrich already having fired his entire staff and outlined a plan of relying on social media going forward, that’s pretty much that. Mitt Romney will be the Republican nominee. (Sorry Ron Paul, but facts is facts.) And so it’s over. But also beginning!

With the general election campaign de facto beginning today (with 208 days, aka 7 months to go, saints preserve us all) I’d like to muse about what kind of shape the primary campaign leaves Romney in vis-a-vis the general election. I think a couple of visual aids are instructive in this regard. First of all, let’s look at Romney’s trajectory getting here versus the previous Republican nominee, John McCain (charts courtesy of RealClear Politics): 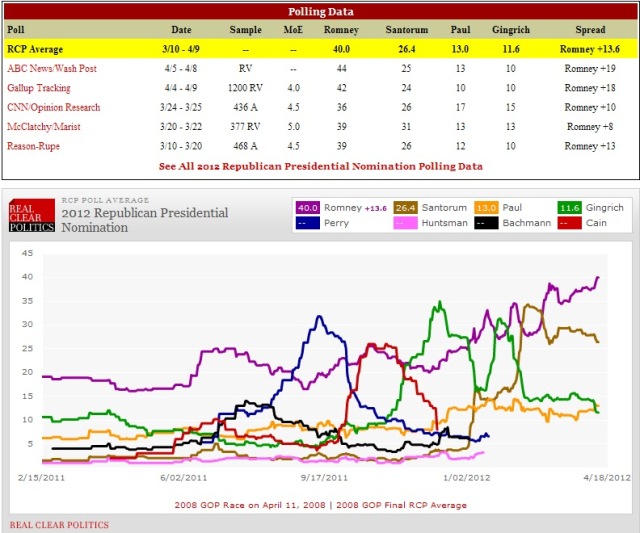 What’s immediately visually apparent is that Romney’s had a heck of a harder time getting there than McCain did. McCain lagged until just before voting started in January, and then shot ahead and pretty much never looked back. Romney, in contrast, repeatedly had and then lost a lead, took a month longer to get to presumptive nominee status, and even as of the point of wrapping the whole thing up, has never been above 40% in national polls. Against, it should be noted, a far weaker field than McCain faced. 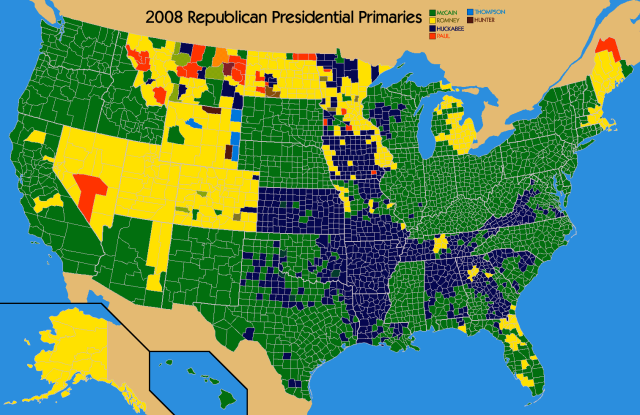 What is immediately apparent is that Romney 2012, excepting Virginia, where incompetence kept everyone else off the ballot, only wins certain kinds of counties. Namely, New England and Western (both areas he did well in 2008) and urban. There are many states where he won (like Illinois, Michigan, Ohio & Wisconsin) by virtue of taking the urban centers, while Santorum took almost all of the rural counties. Compare this to McCain, who, aside from some obvious weakness in the South (though he still did better, county by county, than Romney 2012), tended to sweep entire states when he won them.

Why does this matter? McCain, so far, has been the most weakly supported Republican nominee of the modern era within the party:

While Romney’s total will no doubt climb from here, he’s currently trending much lower than McCain did in 2008, which was itself much lower than any other Republican nominee. In fact, so far Romney’s near the bottom for any nominee from either party. The party, any party, of course, supports their nominee. But enthusiasm matters. The only candidates who have gone in to the general election and won with less than 50% internal support were Jimmy Carter and Barack Obama, who were both heading in to elections a challenger would be heavily favored to win (worsening economy, scandal or discredit of existing administration, outgoing party had been in power for 8 years, etc.).

Now, I’m not predicting a blowout based on this. My gut feeling is that Obama has gone from having a 50/50 chance 6 months ago to being something more like a 60/40 or 70/30 now. In other words, he’s more likely than not to win. But it will never seem assured, it’s going to be close the whole way. In very close elections, as this one has all indications of being, even a marginal comparative lack of enthusiasm can be damaging. And Romney appears to have a pretty major internal lack of enthusiasm heading in.

2 thoughts on “And so it ends…and begins! (First Question: How weak is Romney?)”