First things first, Romney, as you’ll see below, seems to be well-headed to victory in Florida on Tuesday: 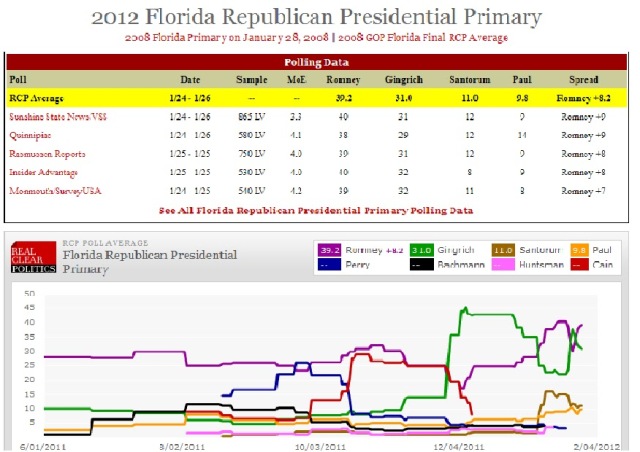 As of Friday, his surge and Gingrich’s drop were plateauing, but at levels that leave Romney 8+ percent ahead. With about 9% undecided, almost all of them would have to break for Gingrich for him to regain the lead, and given his uneven performance in Friday’s debate, that doesn’t seem likely. The latest models at fivethirtyeight.com are also forecasting a Romney victory of 8.5%.

So what will this probable victory mean? Just 11 days ago, when I was expecting Florida to mark four Romney victories out of four, I thought it would mean the end of the race. Then Gingrich surged, Perry dropped out and Santorum retroactively became the victor in Iowa, causing me to recant just before South Carolina. Romney has rallied in Florida, getting muscular with attacks, clearing up his hedging on financial disclosure, and drawing in the establishment, who were suddenly panicked by Gingrich’s resurgence. Will a Romney Florida win knock Gingrich out and once again point us toward a quick sew up?

I think there are some reasons to be skeptical. For one thing, Santorum is just about out of money, and it’s not clear how a Florida third place that barely clears 10% would help him. Which leaves us with some interesting math:

If you look at the votes so far for the seven Republican candidates that started out in Iowa, a few things stand out:
1. Elimination has been fairly rational, in the sense that everyone who only garnered single didgits is now gone.
2. If you are Gingrich, you’re so close to Romney overall so far that only an ultra-shellacking in Florida would convince you that you have no chance long term.
3. Assuming that all Huntsman votes would have gone to Romney if Huntsman hadn’t been in the race, and assuming that some, but not all of the conservative votes (I’ve taken 75% of totals for Bachmann, Gingrich, Perry and Santorum) would have gone to a single Conservative candidate if there was only one in the race, the hypothetical Conservative would lead Romney so far. If you assume even more Conservative overlap, and/or less than 100% Huntsman conversion to Romney, the Conservative would lead by even more.
4. Bachmann and Perry are gone, and Santorum is running out of money. Gingrich is, effectively, the only remaining figure Conservatives dissatisfied with Romney will have to flock to after Florida.
The schedule between Florida and Super Tuesday on March 6th gives Gingrich several chances to steal a surprise victory or two and rally those still looking for an alternative to Romney, keeping things interesting until Super Tuesday on March 6th.
On the skeptical toward my skepticism side of the coin, it’s a heck of a lot of time, and a heck of a lot of geography to cover, for a candidate as underfunded and understaffed as Gingrich. It’s also worth noting that Gingrich’s best chance is probably in the arch-Conservative Arizona, but they don’t vote for four weeks after Florida. And the lightning rod issue there is immigration, just about the only issue in existence on which he is actually to the left of Romney.
It will be interesting to see it all play out…

1 thought on “When Romney wins Florida it’s…over? Beginning? In the middle?”