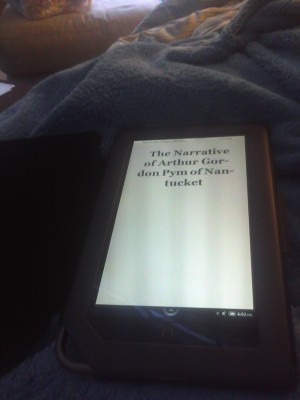 
When I got the Nook for Christmas and set about using my Barnes & Noble gift cards to download things to it, one of the first things I discovered was the joy of works that are beyond copyright protection. 99 cents can get you a lot, and if (as I would recommend) you spring for the extra few dollars to get to the $2.99-$4.99 category to get collections that have proper indexing for E-readers, you can find yourself with the entire works of William Shakespeare, Dostoyevsky or H.P. Lovecraft for under five dollars each. And, in this case, Edgar Allen Poe as well.

When I downloaded a collection of his stories, I discovered that it also included The Narrative of Arthur Gordon Pym, the only novel he ever wrote. Having just finished it, I can testify that it is a gem, albeit a somewhat baffling one. What starts off as an adventure at sea story, and then takes a decidedly Poeian turn to cannibalism, becomes a fantasy of Antarctic exploration that then ends without an ending. Poe didn’t die in the middle. Publishers didn’t pressure him to finish it. He quite deliberately ends with a mysterious final scene, and then writes an afterword explaining how the last few chapters (since it’s written as a memoir that has been “discovered” by Poe) have been lost.

While this is consternating, it does produce a curious effect of mystery and wonder that I, and apparently many other readers, ended up appreciating. The language is a delight, as is the always self-obsessed narration of the main character as he stumbles through fantastical scenes of stowing away, mutiny, shipwreck, starvation and sailing ever southward through increasingly strange realms.

One of the things that I found most interesting in reading about it after reading it, is the profound effect this strange little unfinished book has had on other writers. I’d known that H.P. Lovecraft was influenced by it and makes repeated references to it in his Antarctic novel At The Mountains of Madness. In addition to that, though, it appears to have been a major, uncredited, influence on Herman Melville in writing Moby Dick, was admired and translated by Baudelaire, and also inspired loosely-related sequels by Jules Verne and another 19th century writer, Charles Romyn Dake. More recently the book inspired critiques of its racial depictions by Toni Morrison, which themselves became the jumping-off point of Mat Johnson’s satirical 2011 novel Pym, in which an African-American literature professor becomes obsessed with finding the inhabitants of the islands described toward the end of Poe’s novel.

I myself found the depictions of the “savages” in the book to be troubling in their early-19th century way. Perhaps it’s my own post-modernity talking, but I wondered along the way if Poe wasn’t slightly tongue in cheek about it. The narrator believes they’re guilty of a brutal massacre, but there are subtle indications throughout the work that the narrator himself is somewhat incompetent and not entirely reliable in his recollections. Are the signs that he sees of what he believes is a deliberately set-up ambush actually totally misinterpreted? One of several interesting questions to consider while reading…

3 thoughts on “Book Review: The Narrative of Arthur Gordon Pym”