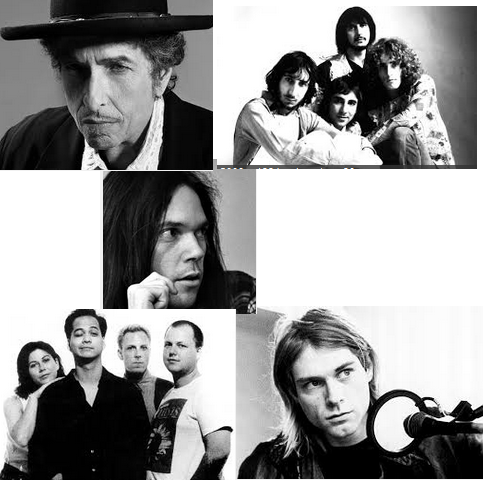 I can hardly even tell you what Prince means to me. Despite that, I will give it a try in part two of this post next week. For now, suffice it to say that 1999 was one of the first albums I owned that didn’t feature a Muppet or music from Star Wars. It was a revelation to a rural twelve year-old living in the days before the Internet let you know that there were other weirdos out there. I’ve followed the twists and turns of his musical evolution ever since, and his passing has hit me noticeably harder than most celebrity deaths.

Maybe that’s why it caught my attention when a friend posted an observation last week about how we express our appreciation when someone’s gone, but we ought to do it while they’re still around, and then proceeded to list some of the still-living musicians who’ve had an impact on his life. Reading his post, I reflected that four of my all-time top-ten are already gone. It’s high time to do some appreciating! Forthwith, here are my top five musicians. Presented in chronological order of their debut, because I don’t even know how to approach putting them in an actual 1-5 order. Next week we’ll cover 6-10.

Bob Dylan There have, of course, been many Dylans- earnest folk singer, surrealist 60s troubadour, heartland country poet, born again evangelist, wry and grizzled veteran- I could go on, but the point is I love them all. In every incarnation, his lyrical vision is as idiosyncratic as his voice, and uncompromisingly intelligent. Musically, he draws from the deep well springs of American music, blues, country, folk, with the same fusion of playfulness and mastery he brings to his songwriting.  It’s not easy to be simultaneously utterly earnest and also obviously slyly on the con, but Dylan does it. His creations often already seem timeless at the moment they come out, and the legacy only grows as time passes.

The Who/Pete Townshend You’ll notice there’s no Beatles or Stones in this list. Obviously, I’m not arguing that those bands are crap. I love them. We are all required by law to love them. But for me, every time I clear a classic Pete Townshend guitar riff on a Who song, or the plaintive keen of his voice on his solo work, I am instantly transported in a way I am not with those other bands. To a place where the music is it’s own justification. Where there is no history, no fear, no me, just Rock. Long live Rock!

Neil Young Again, a voice that instantly transports me, and a fiercely individual viewpoint and lyrical depth to back it up. Those would be mighty weapons were they all that he had in his arsenal, but then there’s the guitar. He can play a country song so straight up that there’s not a hint of irony in it and then (on the same album even) switch to a scorching shredded feedback so damn hard that Grunge immediately recognized him as a spiritual fore-bearer when it arrived on the scene.

The Pixies/Frank Black The legend is that Frank Black recruited Kim Deal to the Pixies with an add saying that he was looking for a bass player who liked Peter, Paul & Mary & Husker Du. Now, I like Kim Deal. A lot. So much so that I don’t even think they should call the current band the Pixies without her. But it’s Frank Black’s musical vision,  crystallized in the story above, that most catches my attention in their albums and his solo work since. His music is a place in which surf harmonies and noise pop live together in unquiet peace. Lyrically he’s frequently dark, sometimes hilarious, often both at once, but creates obsidian worlds that are wondrous and unmistakably unique.

Nirvana I am always aspiring to reach a place in my writing so authentic, so direct, that the effect is searing and impossible to turn away from. Nirvana, for me, has come to symbolize that place. There’s never a hint of falseness in what they do, and a fresh listen to Nevermind now still reminds you what an amazing thing it was when they burned down the pop charts in 1991. Kurt Cobain remains haunting because he also symbolizes the flip side of having a vision that unrelenting- it can consume itself on the way. For both the promise and the caution, and because they still sound incendiarily fresh twenty years later, I keep listening.