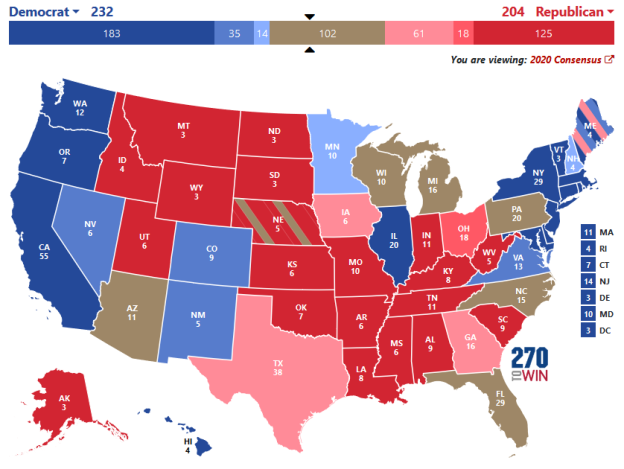 About 6 weeks ago, I did my latest update on the election outlook. At the time, I concluded that Biden seemed to have a pretty strong chance based on prevailing indications, and there were plenty of signs that Trump was in trouble. Today marks five months out. Is there anything to add to our previous examination? I think so!

Let’s start with the basics. Yes, Biden is still the all-but-certain nominee. Not only have all rivals dropped out, all endorsed him including chief rival Bernie Sanders, the prior nominee endorsed him, and the last Democratic President endorsed him, as of last night’s Super Tuesday, he is sitting less than 100 delegates off of making it official: 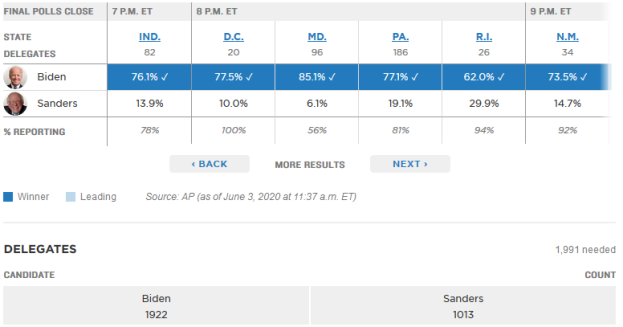 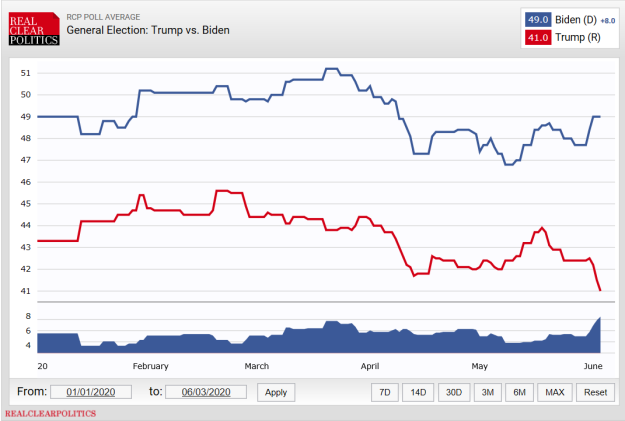 More than that, year-to-date Biden has always had a healthy lead. It’s instructive in this regard to compare his numbers to Clinton’s 2016 numbers for the same time period. A key thing to note is that she was rarely above 48% (where she ultimately finished) and spent only a single day above 50%: 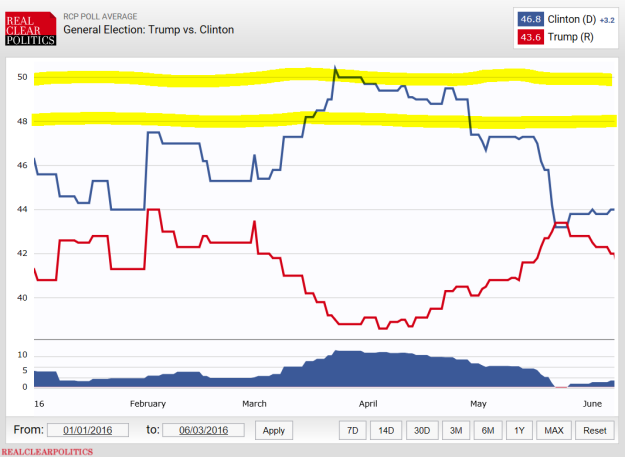 In contrast, Biden has mostly been above 48%, and has spent significant time over 50%: 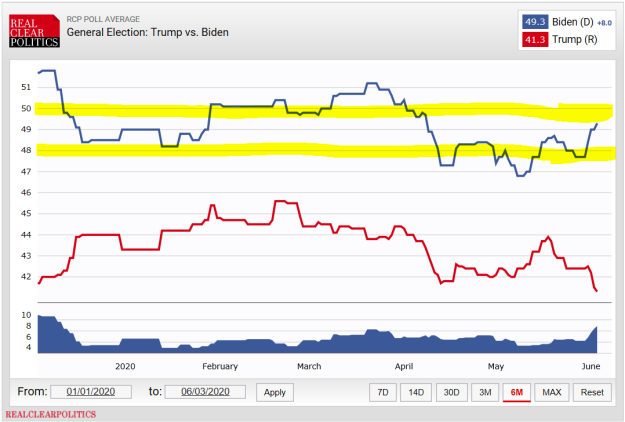 Of course, as 2016 painfully demonstrated, the popular vote isn’t what ultimately matters. The election is determined by that cute little antiquated Constitutional mechanism, the Electoral College. To do an initial “face value” analysis of that, Clinton “lost” in 2016 by being at +2% nationally, and Biden’s average is currently +8%. If you add 6% to Clinton’s state-by-state 2016 margins, you get this map: 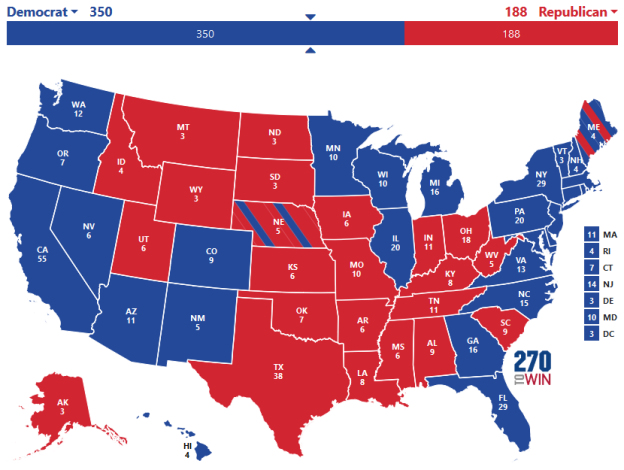 An interesting ballpark, but I’ll grant you, things are not that straightforward. 2016 really came down to a handful of swing states, and the dynamics of those swing states will be different in 2020 than they were in 2016. What do current polling averages of these states currently show?

That’s a Biden lead in 5 out of 6, and Trump’s lead in the 6th is razor-thin. If we just take only the states where Biden’s lead is outside of a 3 -point margin of error, we get the following map: 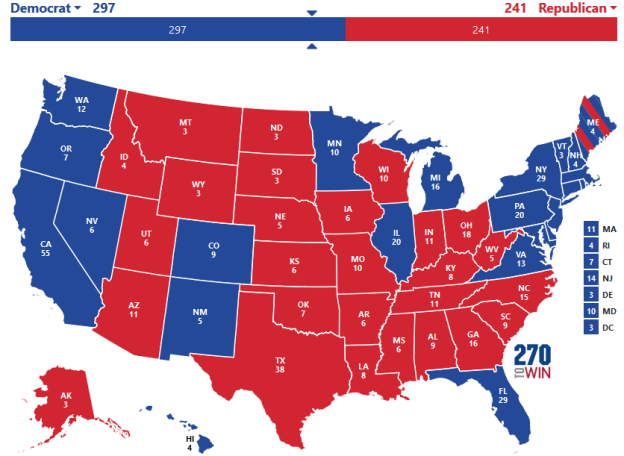 If we took the “no toss-ups” approach for all current state polling averages, the map looks like this: 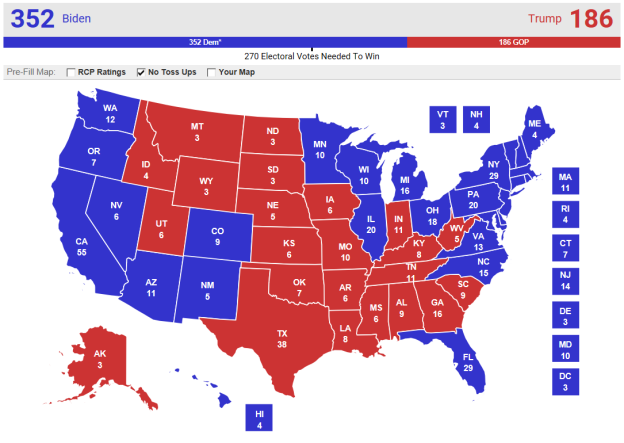 The other way to look at this is to consider the President’s approval rating according to an average of recent polls. It’s currently more than ten percent net negative, which is where it’s been for much of his Presidency: 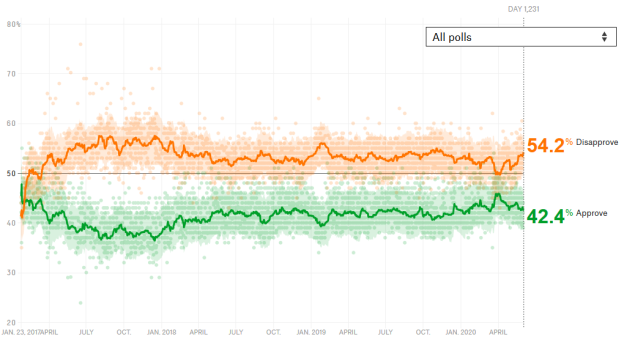 More than that, except for literally the first few days of his term, he’s never had a net-positive rating. Comparing his net approval to other recent administrations reveals the stark difference. The only recent Presidents who his net numbers are similar to at the moment are Carter and Bush I, who of course were both first term Presidents who were about to be defeated: 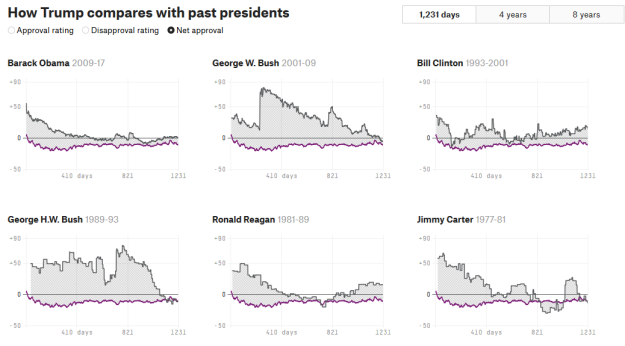 My final appeal is to common sense. Consider the following:

So, has the outlook changed since our last check in? Yes, in that it’s gotten better for Biden and worse for Trump. It could be that the current crisis reverses this trend, but my instinct is that it won’t. More than anything, the thing that most stands out is how durable the dynamics of the race have been year-to-date no matter what external events have been in play.

I’m not saying take it as a sure thing. Not even remotely. I am saying be very encouraged as you go out to do the work that needs to be done over the next five months to make it so.  Tune in some time in early July to see if it’s looking different with four months to go!