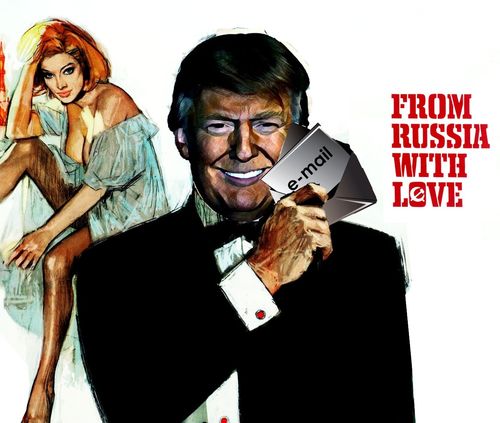 As promised, I will keep updating this regularly with new developments. The story had been larger on simmer the past three weeks. Then Sally Yates’ testimony before the Senate Intelligence Committee and Trump’s firing of FBI director James Comey sent it into overdrive! Updates in the various sections below, but first here’s a brief overview of what we know at this time, and some open questions:

That’s where we are so far. Below is the original text of my entries since 2/21, with new content from the last two weeks highlighted in blue. And if the paltry 10,400 some-odd words below leaves you wanting more, Political Wire has produced a complete timeline of Trump-Russia affairs dating back to the 80s that currently runs 170 pages!

Among my various ventures into activism since the election, I joined an online group where each member takes ownership of two issues. This group is based on the theory that nobody can be continuously engaged on all issues all the time. So, for our adopted issues, we each update the group on new information, issue action calls when appropriate, etc.

As an election wonk, one of my adopted issues is the midterm elections. The other I’ve chosen is keeping track of developments regarding Russian interference in the 2016 election and Trump official contacts with Russia. Being a Cold War kid from Reagan’s 80s Cold War relapse and a lifelong fan of spy fact and fiction, it was perhaps inevitable.

The good news is that I’ll be sharing my work not just with my group, but also with all of you! Below I’ve gathered some of the major news items relating to Russian interference/Russian contact, complete with links, arranged roughly chronologically, and sorted into “confirmed”, “probable” and “read this at your own risk” categories.