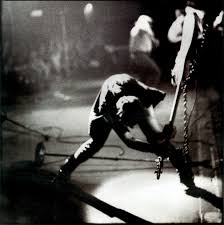 I’m a music geek. I’m a total geek for lists. I also love documentaries. And history. If only there was some way to combine all of these. Wait– THERE IS!

Without further ado, I present you here a brief history of punk rock through documentaries, suitable for the audiophile, cinephile, and home-schoolers doing a unit on popular music. Note that these are presented in order of where they fall in the history of punk’s development, rather than when the films came out.

End of the Century: The Story of the Ramones (2003, Jim Fields and Michael Gramaglia) Often lost in the mix of its subsequent history is the fact that Punk actually started in the U.S.. Here’s the story of one of the first punk bands, highlighting the long shadow they cast on both sides of the Atlantic.

The Great Rock ‘n’ Roll Swindle (1980, Julien Temple) It may have started here, but it was in the U.K.that punk burst into the public consciousness, and there wasn’t a louder source of the P.R. burst than the Sex Pistols. This documentary of their rise and fall is set apart by coming from the era, and being itself a punk pastiche of sound and vision.

The Filth and the Fury (2000, Julien Temple) Twenty years later, Julien Temple came back to do a more conventional (and thorough) documentary on the Sex Pistols. It lacks the verve of his earlier film, but makes up for it in accuracy, and really puts the band and the Punk movement in a wider context.

The Clash: Westway to the World (2000, Don Letts) This documentary does a similar kind of treatment for the Clash. If the Pistols were the brains of U.K. Punk, the Clash were the brawn. Or maybe exactly vice versa… Either way, Letts makes great use of performance footage, interviews and news clips to remind you why it wasn’t purely hubris to call the Clash “the only band that matters”.

The Decline of Western Civilization (1981, Penelope Spheris) The funny thing about influence is, it runs both ways. If the Ramones helped jump-start U.K. Punk, U.K. Punk equally fed back into the scene in the U.S.. Heavy on live performance and interviews with the bands themselves, Penelope Spheris’ powerhouse showcase vividly brings the LA Punk scene of the early 80s to life.

We Jam Econo (2005, Tim Irwin & Keith Scheiron) From the general to the specific, this film hones in on The Minutemen, one of the more unique bands to come out of that Southern California scene before their highly literate, political and musically eclectic mix was brought to an end by their front man’s premature death just as they were on the verge of wider success.

American Hardcore (2006, Paul Rachman) Who the hell needs wider success? In the course of the 80s, LA Punk became LA Hardcore, and similar scenes popped up around the nation. This film chronicles the development of the nationwide scene, and makes a persuasive argument that Hardcore Punk was the only functioning political opposition in Reagan’s America.

1991: The Year Punk Broke (1992, Dave Markey) One thing about American Hardcore is that it ends the 80s on a distinctively downbeat note- a la the scene is gone now, and the kids all suck. This 1992 documentary puts the lie to that kind of defeatism. It chronicles a tour by Sonic Youth and the bands they brought with them, including priceless footage of a fledgling Nirvana, and is a reminder that, even as Punk flamed out throughout the 80s, it was giving birth to an alternative music scene that still had a splash or two left to make.

This list will get you going, but there’s more to discover. And I’d love to hear some that you recommend!