Well, here we are… 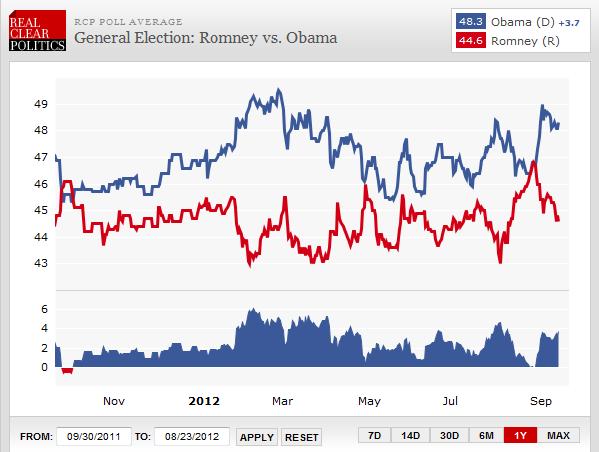 With 44 days to go, President Obama is polling above 48%, and is ahead of Mitt Romney by 3.7%. And this is not just any check-in. At the time of our last update, we had yet to see the effect of much real news on the race. Now we have quite a bit of real news under our belts. It’s now been:

So now these numbers can be considered quite a bit more indicative than before. And what do they show? You’ve seen the graph above. Also worth considering is the electoral college map, since that, of course, is how the President is actually elected. If one takes the most conservative route of only assuming Obama carries that states where he’s currently polling even higher than his 3.7% national average, the map looks like this (courtesy of RealClearPolitics): 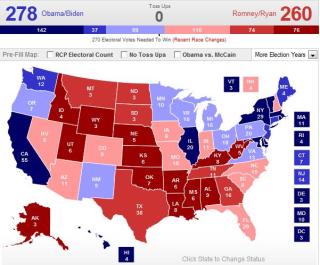 If we look at the map with all leads, it’s a blow-out for Obama, with only Indiana, North Carolina, and Nebraska’s split vote flipped from Obama’s 2008 total to Romney:

In other words, any way you slice it, it’s a pretty convincing lead. The odds-makers over at InTrade tend to agree:

As does Nate Silver’s model over at FiveThirtyeight.com:

You’ll see many stories in the days ahead about how Romney isn’t as hosed as he seems. Like this one for example. Most will be written by partisans trying very hard to believe, but that doesn’t mean they’re completely wrong. Indeed, to see the FiveThirtyEight model on the flipside, it’s saying if you run the race 44 days forward from where it is now 10 times, you’d expect Romeny to win at least twice, even given present numbers. This thing will certainly tighten up from where it is now.

However, as laid out above, we now have a lot of news behind us, and the debates are the remaining major campaign driver. Based on historical experience, it would be a mistake to expect them to change things fundamentally (for more on this, see this article from the American Prospect). Which leaves external events. There is no doubt more fallout from Libya, and more uncertain economic indicators. These are the kinds of things that can take the edge off of Obama’s numbers, but not the kind of things that would totally change the dynamic. To understand how we got here, I think it’s useful to look at the period since the Ryan announcement:

As you can see, the announcement, and the convention, actually helped Romney quite a bit, bringing him from a trough of 43% up to around 46.8% at his height. Moreover, the two combined took a lot of steam out of Obama’s numbers, bringing them down from 48% to 46% at his lowest point. The effect of all of this, though, was just to tie it. And if all you are is tied after the maximum burst of positive attention on you, well… So then Obama got his own convention bounce, and Romney’s numbers took a corresponding dive. Then, as Obama’s bounce was beginning to fade, and Romeny’s numbers stabilizing for a likely rebound to some extent, news happened. It looks to me like the effect of Romney’s bungled response to the Libyan crisis and the leak of his “writing off 47%” comments (not to mention his digging in and doubling-down every chance he got once these stories started to play badly for him) has been to send his numbers sideways (and even somewhat downward) just when they should have been recovering a little. And, on the other side, they allowed Obama to keep more of his post-convention buzz than he otherwise would have.

This is going to fade a little bit toward the mean from here, but at levels much more difficult for Romney to recoup from than they would have been minus his two weeks of mis-steps. For example, let’s say Romney had good debate showings that were worth a point of swing, and Obama had a string of negative external news that was worth another point of swing, plus a general tightening of a point. That would be some major shifts all in Romney’s direction, and it would still leave Obama ahead by 0.7%. Barring major crisis or huge debate surprises, Obama’s solid lead is the new normal for the race, and it’s going to be a very tough hill for Romney to climb.

1 thought on “How Mitt Romney solidified Obama’s bounce (and lost the race?)”