We’re at about five months to go now, and one of the more noteworthy things about the month since our last update is just how little has been noteworthy. The polling average is currently looking like this (courtesy of Real Clear Politics): 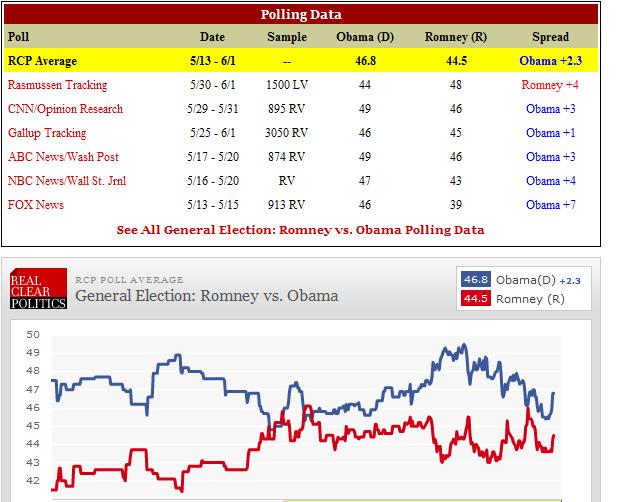 The last time Romney had a sustained lead was for a few days in October. The apparent spike a few weeks ago where he nearly overtakes a plunging Obama appears to have been more of a data artifact. There were no major news drivers, and the Intrade odds that put Obama at around 60% didn’t move during that period at all. I suspect what happened is that a window in which there were few current polls out in the field magnified the influence of a Romney-favoring outlier (Hello, Rasmussen!).

The last week or two, though, the Intrade odds have lowered to around 55% (interestingly just as the RCP average has been showing a spike for Obama). This probably reflects an unease in the air about the economy. A little bad job report here, a little Euro anxiety there, will do that. It’s not hard to imagine that a downturn will have a negative effect on Obama’s chances, as Nate Silver points out. If the economy does continue downward, it probably won’t  really matter that Romney has no logical counter-plan. The incumbent usually, quite simply, wins when things are buoyant (1972, 1984, 1996) and losses when they’re bad (1980, 1992).

You’ll see a few recent elections I’ve skipped above that did have an incumbent running- 1976 and 2004. Those, in some ways, are the most interesting cases for where we are now. When an economy is mixed, you usually get: surprise, surprise, a close election (Bush narrowly winning in 2004, Ford narrowly losing in 1976, the lead trading back and forth all along each year).

That, I think, is what we’re likely to be looking at. Obama has maintained a consistent favorability edge over Romney: 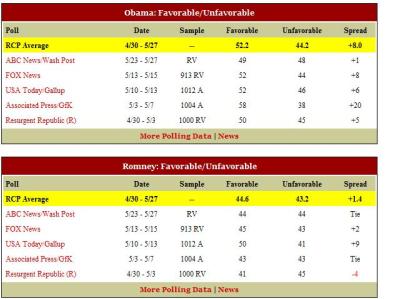 His approval has been pretty much flat-lined between approval/disapproval for the past four months: 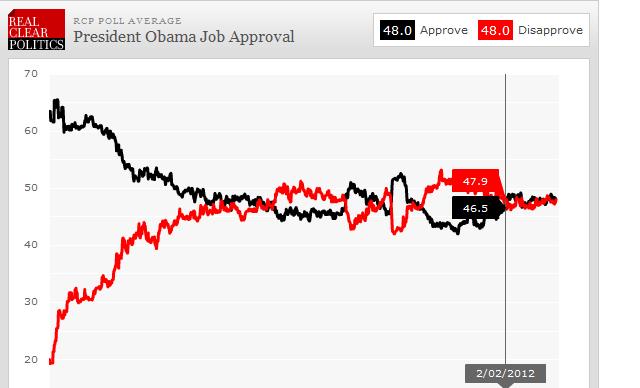 And his electoral college outlook remains strong. Taking only the states where Obama is polling at least a percent ahead of his consistent national 2 percentish lead, we get: 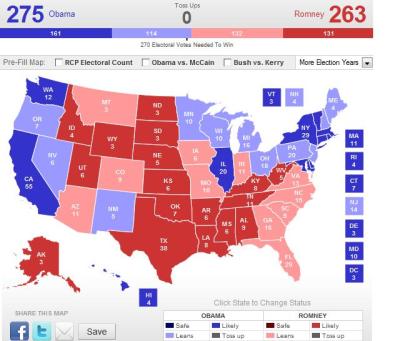 In other words, even if Obama went down nationally to 50-50ish, he’d still win enough states comfortably enough to win 275-263.

Probably about what we’re seeing. A 1-2.5% polling lead, leading to a sufficient, but always going to look at risk, electoral college outcome.

Romney will pick a VP, which will produce some buzz. Which will fade. Romney will get a convention bump. It will fade. Obama will get a convention bump. It will fade. There will be a few debates, and opinions on them will be mixed and numbers will surge and dip temporarily. Mini-brouhahas will erupt over a past revelation here and a mangled phrase there. But, unless the economic situation turns clearly worse or clearly better, I don’t see anything fundamentally changing the picture that points to an ongoing nearly break-even that eventually (and narrowly) breaks for Obama.