In a few hours now, we’ll be seeing the results roll in from the New Hampshire primary. In my case, I’ll probably be on a news website by 8 PM refreshing live results every 15 minutes. Because that’s just the way I am… For the record, here’s what the latest polling is showing: 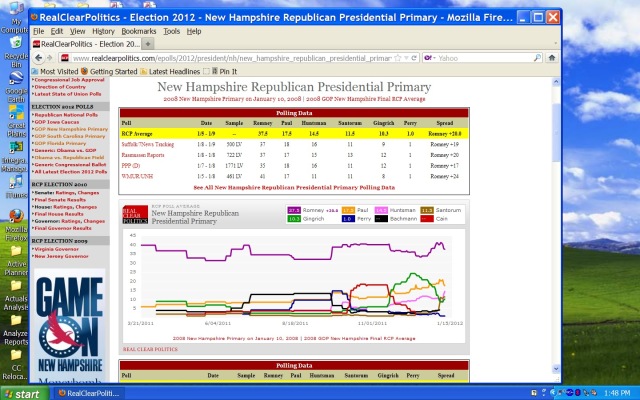 The statistical model over at fivethirtyeight.com is pretty much in line with this too. Astute cases are being made, like this one from Politico.com, that tonight’s result will essentially mean that the nominating contest is over for the Republicans, since a strong win in NH will position Romney for a sweep of South Carolina and Florida too. Of course, you can find a contrarian view at the very same news site, which just goes to show that hope for an interesting primary season springs eternal.

My take? I have to side with the sweep theory. Even in the debates this weekend, most of the candidates still focused on bashing each other in pursuit of second (and third) place rather than targeting Romney in pursuit of first. Perry’s decision to stay in through South Carolina and the fact that however they finish tonight, Santorum and Gingrich will be around for that contest too practically guarantees that Romney wins South Carolina, however underwhelmingly. And the fact is, you can’t second or third place your way to winning the nomination, but you absolutely can get there through a string of underwhelming first place finishes.

I can still make a case for some interest tonight though. Romney is so thoroughly expected to win, and win big, that he has the most to lose. Finishing 20% ahead of the next comer could just get him an “as expected”, but having someone get closer than that and/or finishing first, but with the same 31% share he had in 2008, will probably be counted against him. And that would make South Carolina tougher, to be sure.

The thing is, nobody else is likely to walk out of tonight with good enough news. If Gingrich can get ahead of Santorum into fourth place he does himself some favors, but fourth is still pretty far back. If Santorum can get into the top three, that would be something, but third is still third. Ron Paul is expected to get second, so anything else would be bad for him, but he’s the kind of candidate who can keep going regardless. And no matter how they place, they’ll all be in South Carolina for the next 10 days, carving up the vote there so thoroughly that Romney can comfortably win even with only 25-30%.

Huntsman is the only candidate having last-minute momentum, and it isn’t impossible that he could pull off a surprise second. But even so, he has nowhere to go after New Hampshire. The party at large is clearly not looking for someone more centrist than Romney, and no amount of bounce will make Huntsman of interest in famously conservative South Carolina.

One piece of good news in the New Hampshire windup? If you read my earlier blog on “the gaffe” you know that I abhor how feeding frenzies around stray comments obscure actual substance. To their credit, Gingrich and Santorum took the high road and avoided pouncing on Romney’s “I like to be able to fire people” miss-comment, recognizing the substance of what he was saying about flexible health care being better for companies. Glimmers of adulthood are always welcome in a presidential race.

1 thought on “New Hampshire: This is the end! Or not.”