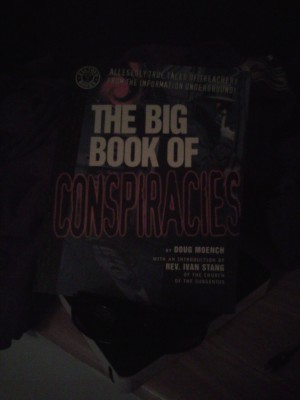 I just finished this book, which had been part of my recent Amazon birthday haul, so I thought I would strike the iron of review while the reading is still hot. Or something like that.

I have to say I quite enjoyed it, perhaps even more than its sister volume The Big Book of the Unexplained. I certainly found this tome to be more disquieting. And delightful. That’s right, delightfully disquieting.

That’s what you get when you have well-researched text on some of the darkest conspiracy allegations out there illustrated by 39 different comic artists. I think this is actually a pretty compelling combination, which could profitably be used a lot more than it is. There’s like this, and Classic Comics. And I guess that whole Introducing/For Beginners book series, which I’m also a big fan of. Someone likes narrative art, apparently…

A word on the artists themselves: they were really good! It was a pleasure to run in to a few names I knew well from mainstream comics: Frank Quitely, Michael Avon Oeming and Bob Smith, for example. A lot of the others though, were from alternative comics, with styles ranging from cartoonish to dark and surreal. I look forward to catching up with what they’ve been up to since the mid-90s.

As far as the text goes, Moench is a comics writer as well, and the writing benefits from the best features of the medium: it’s lucid, fast-moving, and entertaining. It’s also, despite the obvious mirth behind the form, well-researched and packed with information. As in a five page double column bibliography citing the sources for what’s presented in the 39 chapters.

Conspiracy theory is as conspiracy theory does, and some of what’s presented here is definitely a wild leap, or based on specious connections. I enjoyed further researching a lot of it online as well, and, predictably, some things are less sinister (and solid) than they appear to be at first glance. There are others, though, that get more disquieting. To touch on a Golden Oldie, what the heck is up with Lee Harvey Oswald? I’m finding that to be the most interesting (and fruitful question) in the whole JFK thing- maybe there was only one gunmen, and he was that one. But how did he end up there, and why, everywhere in his history that you look, do you find strange connections? There’s something to this whole CIA-Mafia-Cuban Exile thing.

The JFK assassination, of course, ended up in the book a lot, and much of the rest was pretty familiar territory as well: RFK, MLK, CIA mind control, Freemasons, Karen Silkwood, the always dear to my heart UFO-conspiracies. There were also some that were new to me such as:

The book also re-introduced me to the strange death of Danny Casolaro, who was found dead in a hotel of an apparent suicide as he was working on a book about the conspiracy that he claimed linked the October Surprise, Iran Contra, the S&L scandal and just about every other shady late 80s thing there was with a government attempt to steal a security-monitoring software. Were some of his sources questionable? Yep. Did he have financial troubles and other frustrations that could lead to suicide? Yep. Was he being warned off before his death in calls overheard by third parties? Yep. Were his research files missing from the hotel, and never subsequently found? Yep. Again, worth further reading on your part.

But don’t tell anyone I told you so. Or send them a hyperlink to this review…

1 thought on “Review: The Big Book of Conspiracies”